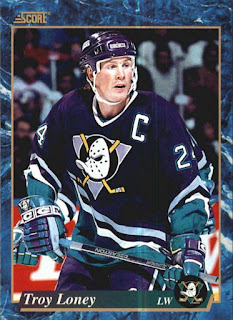 Hockey fans, especially those in southern California, will probably remember the first game played by the Ducks on October 8, 1993 against the Detroit Red Wings.  But on this day in 1993, the newly created Mighty Ducks of Anaheim played their very 1st NHL game against the mighty Penguins.


Approved by the league in 1992, the $50 million Walt Disney franchise, hit the ice sporting their classic purple and green cartoon logo and their sub-$8 million roster, featuring a host of draft picks and the unprotected cast offs from other teams.  The inaugural roster featured players by the likes of Terry Yake, Joe Sacco, Stu Grimson, Todd Ewan and first team captain, former Penguin Troy Loney.

The Penguins were coming off a disappointing season which saw one of their strongest teams of all time ousted from the playoffs by the New York Islanders.  Their roster featured HOFers Ron Francis, Joe Mullen, Mario Lemieux, Larry Murphy, and Bryan Trottier, not to mention future Hall member (?), Jaromir Jagr.

On this day, the Pens would get the best of the Ducks, winning 5-4.  Both Ron Francis and Jaromir Jagr scored as did Mike Ramsey, a defenseman that I somehow forgot about.  They also benefited from two goals from Kevin Stevens.

This Post Brought To You By dogfacedgremlin at 5:30 PM