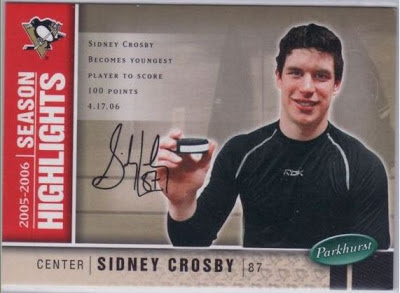 On this date in 2005, Sidney Crosby made his NHL debut with the Pittsburgh Penguins in a game versus the New Jersey Devils.  Crosby skated 15:50 in that game and fed Mark Recchi in front of the net to get his first NHL point.  The Penguins went on to lose the game 1-5 but it would be the start of one of the greatest careers in NHL history.

Crosby would go on to score 39 goals and 102 points that season, finishing sixth overall in scoring.  He became the youngest player ever to score 100 points in a season (eventually losing out on Calder votes to Alex Ovechkin).  Here is his stat line if you are in to those sorts of things.

This Post Brought To You By dogfacedgremlin at 9:00 AM