It's Friday the 13th and I wanted to take a look at who I feel are the top 10 NHL players that chose to buck tradition and go against their superstitions to wear the unlucky number #13.  Compared to many other number combinations, athletes traditionally have shied away from the #13.  In generally, I think that is because athletes tend to be creatures of habit and quite a bit superstitious.  That's not to say there haven't been any takers.  Across the other sports, players like Dan Marino, Wilt Chamberlain, A-Rod, and Roberto Clemente come to mind as famous #13s.

But in hockey, there had always been a long tradition of staying away from that fateful number.  From 1950-1980, there had only been six players to wear the number in an NHL game.  In the 1980s, there wasn't a season with more than five players donning the #13 and many of those players frequently changed their numbers.

A shift in thinking began when European players began invading the NHL and the idea of that number being forbidden was a foreign concept (see what I did there?).  Since 2000-01, the number of players wearing the #13 has gone up fairly significantly but still, there was only one season where more than 20 players wore that number during the year.  Last season, for example, there were 19 NHL players that wore it, including Cam Atkinson, Mathew Barzal, Max Domi (as a tribute to my #3), Johnny Gaudreau, Nico Hischier, and Brandon Tanev.

While we could list all the players that donned the #13 through the ages, I want focus on the best and also those with cards I had readily available.  I will mention players like Jack Stoddard, who some would consider to have paved the way for #13, as he wore that number for a couple years with the Rangers.  But his underwhelming 80 total games played hardly qualifies him to be on the list.  (I also don't have his 1952-53 or 1953-54 Pankhurst cards, neither of which even show his uniform number).

Here are the NHLers I think wore #13 the best. 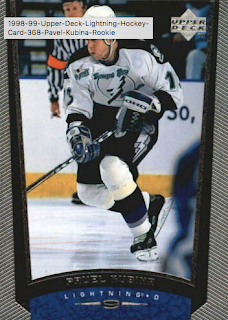 The Tampa Bay defenseman is one of the more rare cases of wearing #13.  He is the only defenseman that I could readily think of that has made #13 his identity.  I'm not sure why that is, other than the fact that D-men are probably more superstitious than forwards because the closer you get to the goalie, the more insane you become.  Kubina played a total of 10 seasons for Tampa Bay along the blue line and played 970 games in his NHL career. 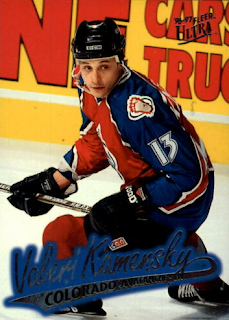 Kamensky had already played almost nine seasons for CSKA Moscow before coming the the NHL.  He was a seasoned veteran in European/International hockey playing alongside other Russian greats like Fetisov, Makarov, Larionov, Fedorov, Krutov, and Mogilny.  Careerwise, he had over 500 points with 200 goals, mostly with the Quebec/Colorado franchise.  In fact, his regular season 85 points and his 22 more in the playoffs is a big reason why the 1995-96 Avalanche won the Cup. 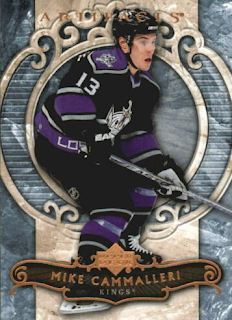 Cammalleri has over 640 points in his NHL career.  That's nothing to shake a stick at.  In 15 NHL seasons, he scored 22 points or more 13 times, with 50 points or more in four of those seasons.  Cammalleri always sticks in my mind because in the middle of a game against Boston, while playing for the Habs, he was traded in the middle of the game back to Calgary.  I always thought that was kind of a dick move by the Habs organization but 2011 was a time when all Montreal did was make bad decisions. 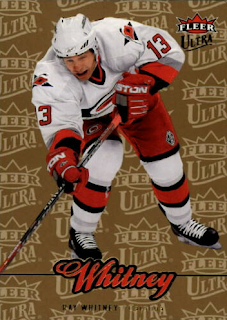 Ray Whitney was an ironman in the NHL.  He played parts of 22 seasons, logging over 1,300 games and putting up over 1,000 points.  Statistically, Ray was one of the most consistent point scorers in NHL history and largely goes unnoticed by critics, hockey writers, and fans.  He began as one of the original San Jose Sharks and ended his career in 2015 as the only inaugural season Shark still in the league.  The Wizard didn't put on the #13 until after the 2004 lockout.  The unlucky number struck silver, as the 2005-06 Hurricanes brought home the Cup.  He wore it the rest of his career. 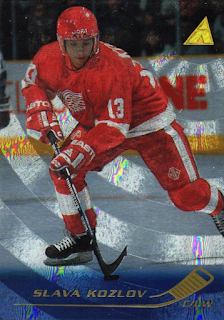 Kozlov wore #13 his entire career and for three different teams.  He began his career in 1991-92 with the Red Wings and continued in Detroit for the next 10 seasons as part of Scotty Bowman's "Russian Five".  After an injury ridden year with Buffalo, he played the next seven years for the Atlanta Thrashers, scoring over 20 goals five times.  Kozlov logged almost 1,200 games in the NHL, scoring over 300 goals and over 850 points.  All of that is amazing when you consider before he was brought over to the US, he had been in a hospital bed almost on life support after a car crash almost killed him. 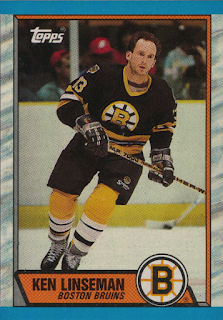 The original Rat (sorry Brad Marchand) was a pest for many years in the NHL.  Linseman played 860 games, scoring over 800 points in his 14 seasons.  But what he was known for wasn't his scoring prowess.  It was his keen ability to drive opponents (and sometimes teammates) absolutely crazy.  He wasn't necessarily a "dirty" player (except when he dishes out groin shots to Tomas Sandstorm, or kicked a guy in Juniors) but unlike my #1 pick, Linseman would not be a player ever nominated for the Lady Byng.  Even Gretzky once said that Linseman would be a guy you hated if he wasn't on your team and Gretzky never says anything bad about anyone.  Linseman scored the Cup winning goal in 1984 for the Oilers and spent the better part of the next six season tormenting the NHL on the Boston Bruins. 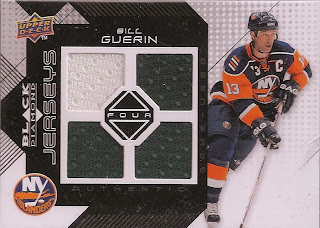 I'm probably biased on this because I am such a fan of my number four pick but Bill Guerin makes my list because of his leadership skills and the fact that he wore the #13 when the Penguins won the Cup in 2009.  He wore #12 with New Jersey (also winning a Cup) and then #9 while on Edmonton.  But the last nine years of his career were spent wearing the #13. 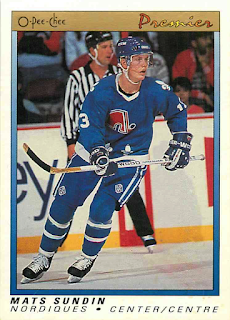 When it comes to a career wearing #13, Sundin is hard to beat.  In fact, he is the highest scoring #13 on the list, putting in 564 goals and 1349 points, all while wearing the fateful number.  Sundin started his career in Quebec for the first four years of his career but he best known as a Maple Leaf.  The 2012 first ballot HOFer played 14 seasons for the Leafs, 11 of them as the team captain. 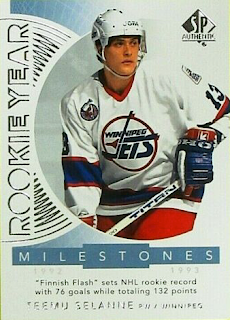 Selanne is probably most famous for wearing #8 but I think many fans may have forgotten that his record setting rookie year was shrouded by the #13.  In 1992-93, Selanne put up astonishing totals for the Winnipeg Jets.  In 84 games during his rookie campaign, the Finnish Flash scored 76 goals and helped with another 56 assists.  His 132 points still stands as a rookie record (the closest to get to that was Alex Ovechkin in 2005-06, where he put up 52 goals and 106 point). 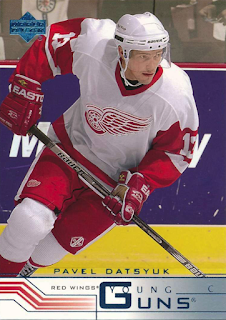 It's hard to argue that Datsyuk wore the #13 the best.  He took that number and helped Detroit to two Stanley Cups while winning three Selke trophies and four Lady Byngs.  With over 950 games to his credit, he has 918 points with over 300 career goals.  He retired from the NHL after the 2015-16 season but has since been playing in the KHL.  So if history has taught us anything, you can't rule out a comeback, even at 41 years young.
This Post Brought To You By dogfacedgremlin at 7:30 AM