If you attended the National Sports Collectors Convention a couple weeks ago, you may have encountered the booth run by Ebay that was located at the far side of the fancy red carpeting.  I'm guessing they were doing this all week but on Saturday, they were giving out free coupons for $10 toward any items on the site.

I took a look through things on my "wantlist" and came up with a way that I could get a few PC items on the cheap, using most of the coupon to pay for the items.  Here is how I fared. 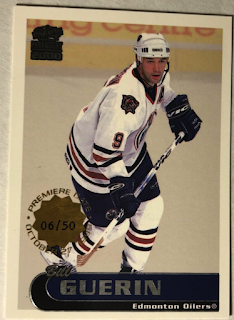 I have quite a few 1999-00 Pacific Paramount Guerins' in my collection but I did not have the Premier Date version.  These were serial numbered #/50 and feature the gold foil stamp over on the left side above the player nameplate.  Now to only finish this one off with the rest of the color parallels. 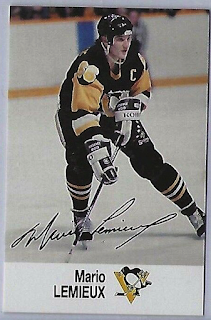 I always liked the Esso AS set for some reason.  These aren't cards, per se.  More like stickers.  I think I have a complete set of them somewhere but I don't remember having just the Mario in my collection.  Although, I don't have the album that was made to hold these in. 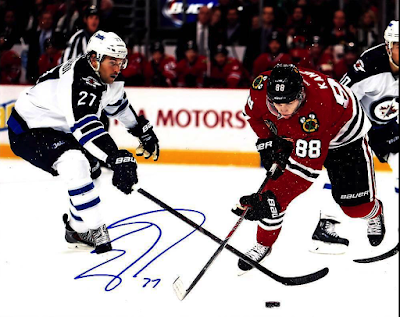 This was a cool pickup because Eric is one of my player's that I PCs.  I own many, many, many autographs but not on anything that isn't a card.  This was my first autograph outside the realm of traditional trading card.  It is a high gloss photo featuring Eric Tangradi when he was with the Winnipeg Jets.  It also shows him head to head with #88 Patrick Kane, making it even cooler.  It's not a "certified" auto in that there was no certificate issued with it, however, I have seen many many signs by him and I'm pretty confident this is legit.  Looks good in a frame, too.
This Post Brought To You By dogfacedgremlin at 6:30 PM

Email ThisBlogThis!Share to TwitterShare to FacebookShare to Pinterest
Labels: #NSCC19, buying on eBay, eBay booth at the national, eBay shopping spree, showing off