Working On Some Sets

We made a stop at our local card shop the other day between kids basketball games and actually spent some time sifting through hockey singles.  Yes, that right.  I said hockey singles.  As in, the LCS, which is located in the United States, outside of Chicago, had singles of hockey cards...for sale...and not as part of a huge collection.  It's true that odds are usually better to find a unicorn in a pot of gold at the end of a rainbow, instead of hockey singles, but I digress.

In all, we grabbed about 94 cards that covered set needs, player collection needs, and some other interesting collection adds.

Just thought I would share some of what we found. 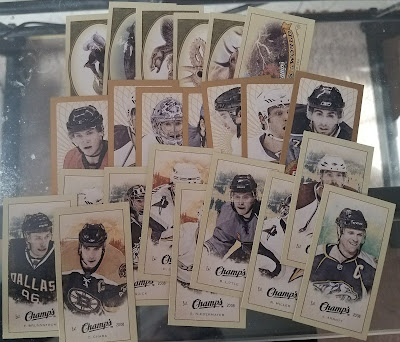 First, shockingly there was a significant pile of 2009-10 Champ's cards, mostly the minis.  This was the second year Upper Deck released the Champ's set and I think it was the best version.  These aren't found very often.  Even at shows that I've attended where there are actually dealers with significant amounts of hockey cards available, these are no where to be found other than the blue base cards.  Full boxes/cases have even somewhat dried up on the secondary market unless you want to pay about $100/box plus $10-30 shipping to get some.  But at this point, most of those boxes are duplicates for me.  So when I saw these, the list came out and off we went.

I need quite a few of them still as I have been trying to build the base set including all the minis, as well as 1-100 in blue, green, red, and yellow (yellow animal variation too but that's a huge undertaking).  I have a few sitting in my COMC account waiting to be shipped but even after that, there are a lot that I need.  If you have any of these lying around that you don't need, check my setlist page and see if you may be able to help. 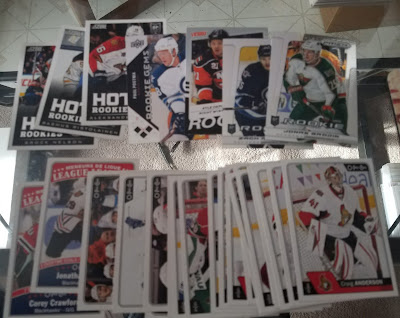 We also found some of last years 2016-17 O-Pee-Chee base cards that we needed.  I have incomplete sets of O-Pee-Chee dating from 2006-07 thru this years set.  It's much easier to find full boxes of these but unfortunately, the last three that I have picked up have yielded nothing but duplicates.  In fact, even the high numbers in one of the boxes were all dupes.

Also included here is a hodgepodge of Score, Black Diamond, Victory, and Prizm that knocked off a few needs. 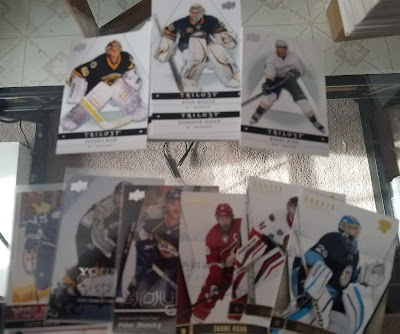 Trilogy singles are rare to find as well but for some reason, today was our lucky day.  The picture doesn't help much here but there was a significant pile of these.  You don't get many in a box, definitely not enough to polish off a base set.  Even two boxes (which we opened that year) didn't get us a base set.  We are just a few cards shy now.

Also in the picture are a few Young Guns from various years and a couple Rookie Anthology cards I still needed for some reason.  I can never remember if these are 2011 or 2012? 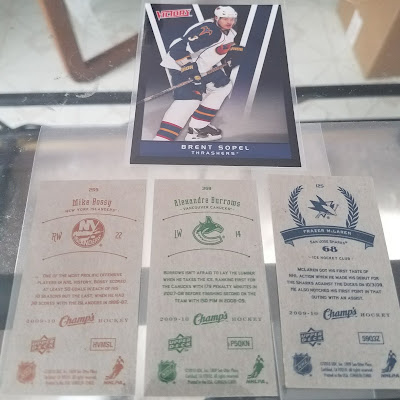 Finally, a few other interesting items we found.  Going back to the Champ's for a second, there were three colored back variations in the mix.  I don't actively pursue these but if I can find them either by accident or on purpose, I generally snatch them up for the right price.  Here we have one each of a Red (Mike Bossy), Green (Alexandre Burrows), and Blue (Frazer McLaren RC) back variation.

Also in the photo is a Brent Sopel 2010-11 Victory Black Variation card. The Blacks were next to impossible to pull from Victory, falling about 1:720 packs.  The rookies are even harder to come by.  Just check out the resale market on Ebay for these and you will see what I'm talking about.  An intro product by Upper Deck with the lowest price point, virtually worthless base cards, and the Black Parallels garner a buck or two just for commons.  I don't actively pursue these but if I find them, why not?

As always...
CHECK MY SETLIST PAGE AND LETS DO SOME TRADING!

This Post Brought To You By dogfacedgremlin at 5:22 PM