A Stormfront Has Officially Arrived In Pittsburgh

I had a fairly long post prepared about the disappointment that has boiled over in Pittsburgh. The Steelers escorted themselves out of the playoffs despite probably being the better team.  Unfortunately they certainly weren't that day and it was Jacksonville that moved on (to be later knocked off by the Cheatr...I mean, Patriots).  The Penguins have been on a yo-yo ride all season due to a variety of factors.  I still think they will be ok come playoff time but lots of people are already in panic mode and it isn't even the All Star break yet.  But my biggest issue was with the Pirates.

As I said, I had a long post...HAD.  It never posted and when I tried several times to force it to post, it simply sat there and stared back at me in contempt.  Error message after error message ensued.  So I decided I would revisit it and post again later.  Well...Blogger decided that it was not in the cards and somehow deleted the bulk of the body of text I wrote and left me with the outline I had first saved.  This left me with some time to reflect on my ire.  My conclusion...my anger isn't displaced as a fan.  I understand why they did what they did however I don't condone it.

First and foremost, in my honest opinion, overall the Pirates ownership is garbage.  Absolute smelly, stinky garbage. There is no excuse for how they run this team and absolutely no reason they don't try to spend to the max every year.  When you have one of the best stadiums in MLB and one of the most loyal fan bases in all of sports, why do you waste your resources?  I'll tell you why.  It's not about winning.  It never was.  It is about one thing, and only one thing...money.

Fans have already begun a petition to force Bob Nutting to sell the team.  They have almost 60,000 signatures as I write this (mine being one of them).  Of course this is just an act of defiance that's not going to force any owner into selling their cash cow but it is definitely a representation of how angry they have made Pirates fans at their complete disregard or care for what it takes to run a successful franchise in today's game.  It's a wonder fans don't just grab the pitchforks and torches on their way to a public hanging.  As most of you reading this already know, Nutting traded away the Pirates' best pitcher in Gerritt Cole and the teams' face of the franchise in Andrew McCutchen.  Not only that, they waited to do it until now, when all that is out there is an uber-soft trade market with nothing but prospects and future-potential maybe's.  It's sad really, and keeps getting worse the more you delve into the actual dollars the team has in payroll, operating costs, and overall value.

Despite being a big fan, I can get over the Cole trade since pitchers are a highly volatile commodity and are traded like Halloween candy.  We have many, many pitching prospects coming up through the system and with any luck, two or three may be in the rotation on a regular basis soon.  However, I probably will never get over getting rid of Cutch.  The guy lives, eats, and breathes Pittsburgh.  He has done more for the community than almost any other athlete in the history of Pittsburgh sports.  The guy was Pittsburgh and wanted to be for the rest of his career.  But Pirates ownership, despite claiming they want to get better, did what they needed to do to stop that.  McCutchen is now forced to say goodbye to his home, the only team he has ever played for, and head out west to the same team we allowed Barry Bonds to go to centuries ago, and where Cutch will finally get a shot at a title.  San Franciso has a plan to win.  Pittsburgh doesn't.

Now Josh Harrison is even saying he should be traded since the team has obviously thrown in the towel on this year, next year, and maybe future years to come.  It's a rowboat made out of a screen door.  The ship is sinking and sinking fast.  Ownership has lost the trust of the fans, the trust of the players, and the trust of the city.  Barring a hot start at the beginning of the 2018 season, I don't see fans losing much of their frustrations anytime soon. 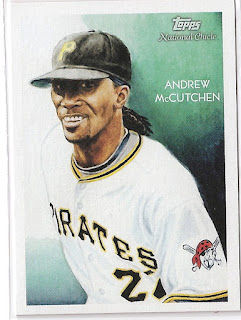 This Post Brought To You By dogfacedgremlin at 2:58 PM