Just in case you may have missed it, Sal over at Puck Junk and I have been doing a weekly podcast where we discuss hockey and hockey cards.  A lot of content has been devoted to the playoffs and such but each episode we try to review either a newer set, and oldie but a goodie, or BOTH.

I put a link to them at the top of the blog on the left hand side if anyone is interested in listening.  At this point, we are up to 5.

Give them a listen.  Most are around a half hour.  Leave a constructive comment or two.
This Post Brought To You By dogfacedgremlin at 6:33 PM 2 comments: Links to this post

A long time ago in my living room far, far away I sat and watched a hockey game between the Pittsburgh Penguins and the New York Rangers.  It was a regular season game on the Deuce (which should tell you how long ago it was) and I was only semi-interested in what was transpiring on the ice since the Pens were losing.  I don't remember exactly what else I was doing other than blankly staring at a space on the wall, when I heard the announcer quip some statistic that caught my attention.

This was long before TiVO and well before the ability to pause and rewind live television, but I distinctly remember him saying that the Rangers were 6-0 while leading after two periods on the road after a previous home loss.  Let me say this one again...the Rangers were 6-0...while leading after two periods...on the road...after having previously lost a home game.  The first thing out of my mouth, directed toward the television screen, with no one else in the room to hear my disdain, was "Why the [expletive deleted] would anyone in the [expletive deleted] world care to know something as [expletive deleted] ridiculous as that statistic?"

And thus began my love/hate relationship with today's statistical nonsensitude.  I am not naive to think that the study of statistics, as we know it, has evolved to this point for no reason.  There is a reason, a good one.  But there is a difference between actual readable performance statistics and what I like to call "situationally ironic stats".  Let me explain. 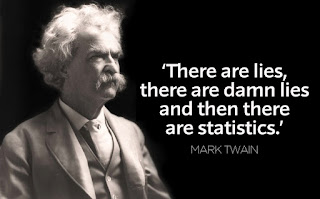 I understand the necessity for teams in all sports to be able to analyze their players and team performance on much more than a 1s and 0s platform (a la Billy Beane).  In hockey for example, the stat for goals, assists, and plus-minus (which many non-hockey people don't really understand) aren't complete at telling the whole story of what happens during a game.  The analysis of possession statistics can help coaches to develop a more intricate game plan, helping to create additional chances and opportunities on the ice that their predecessors decades ago may not have had at their disposal.  Things like Corsi stats which includes puck possession statistics or Fenwick numbers which are similar but don't include shot blocking are all very interesting for the stat monger fans that will argue with you ad nausea about things and literally make you move your seat at the bar.

But for the casual fan and even a long time hockey fan like me, these are fluff numbers that are for the coaches, the scouts, and even the players themselves to understand.  Not me.  That is why I shy away from and more often than not, turn off my brain and go to my happy place when these numbers start dancing across the TV screens, the Twitter feeds, or the occasional print media.  In other words, I understand it, but I don't particularly care to pay attention.

The absolute worst though, are the anecdotes like the one previously mentioned that I call situationally ironic stats.  These are meant to keep your attention.  They are meant for the shock factor, to keep you watching just to see if they come true.  In today's world of social media, these are the perfect tidbits of information to get you to click through.  The computer nerds (and I use that term affectionately) from high school that wanted to be involved with sports but just couldn't get past the awkwardness of it all finally have their IN.  These guys can sit in front of a computer with situational game play analysis software that has evolved substantially over the years with algorithms designed to spit out any number of results depending on what variables are entered.  These guys just need internet access and a teleprompter and all the useless numbers get thrown at us with each passing moment.

If you have never watched a televised NHL game on NBC or NBCSports networks, then you may not be familiar with the overabundance of canon fodder that comes from Mike Emerick's mouth.  He recites these types of circumstantial half-truths at least six times a game, maybe more.  The playoff broadcasts are even worse.

Another great example that occurred during Game 2 of the SCF. Sportsnet Stats tweeted...

"No team in Stanley Cup Final history has lost back-to-back home games when leading each contest after 2 periods."

So logically speaking, despite leading after 2 periods, either both games were wins or at least one of these games was a loss.  Therefore a lead really means nothing because you still have a 50/50 shot at pulling out a victory.  Thanks.  That is helpful.

I was further reminded of how long ago this phenomenon started last evening when my sons decided to watch the classic baseball movie, Little Big League.  For those that have never seen it, it's from 1994, a more innocent time in baseball.  It focuses on young Billy, all of 12 years old, and his adventures as the owner/manager of the Minnesota Twins.  The previous owner, his grandfather, passed away and left the team to him in his will.  After firing the hated team manager and appointing himself to the helm, he eventually leads the team down the road to a playoff opportunity, winning everyones hearts along the way. (see, innocent).  Their radio announcer, Wally Holland, at one point in the movie gives the pinnacle of all inane stats...

"He's eight for 13 this year...against left-handers...in night games...played above the Mason Dixon Line."

Trades. Now's The Time For Trades.

I'm bored and in a collecting funk.  So LET'S TRADE.

I'm looking to get some trades going around here.  I know I have traded with some of you before and there was a time where I was probably not a very good trade partner.  In fact there are probably some of you out there that I still owe cards to.  But I'm now sitting on so much product that I have no where to put things anymore.  What better way of moving it than through trades.

By now everyone knows what I collect.  No?  Really?  Well if you don't here is a list...

Teams:
Pittsburgh Penguins (early 90s stuff is not needed unless it's oddball)
Pittsburgh Steelers
Pittsburgh Pirates (if it's from 1987-1991 I probably already have too many)

Other Projects:
Ball State University Alumni (players that played for BSU or are featured in BSU gear)
Pittsburgh Penguin Autographed cards (check my other blog for what I already have)

I am looking to get rid of a ton of hockey product.  Most of my collection is divided into either players or teams.  Inserts from the last 5 years are divided by brand.  I have singles from the mid 1980s through today.  If you need commons to complete sets, let me know or just send me your lists.  Also, I have about 600 cards listed on Collector's Revolution.  If you go on my inventory and see anything you would like to trade for instead of buy, let me know and I can see what I can do.

I do have some football but nothing recent and really nothing huge.  Most of my football is divided into teams but I do have some player albums with singles.  If you have someone in mind, a set you are trying to finish from the last 10 years or so or a team you collect, let me know.

As far as baseball goes, I do have a sprinkling of some stuff from the last 10 years or so but again, nothing super huge like refractor/auto/jersey stuff.  Baseball is mostly in boxes by sets but back in the late 2000s I sorted a couple monster boxes by player.  The majority are guys from the 1980s and 1990s but there may be a few recent guys separated out.  If you have needs from any of the Topps or Bowman sets from the last 6 years, send me a list and I will look.

Basketball...I don't collect basketball cards but over the years I have accumulated some because of many collections I have purchased.  Because of that I have two 5000 count boxes of basketball cards, mostly from the early to mid 2000s with some mix of early 1990s.  I know nothing about them nor do I care to.  If you have a team you like or a player, let me know and I can reluctantly go through them.

Email ThisBlogThis!Share to TwitterShare to FacebookShare to Pinterest
Labels: trading

That's right, kids.  The blog isn't dead.  It's just a very sleepy, sleepy place.  Why?  Well I have found quite a few other means of communicating with many people out there in the card universe.

First, there is Twitter.  I am fairly active on Twitter, reading all the 140 character goodness that is published daily, hourly, even minutely (put it in Websters) by all my collector friends, dealers, writers, and sports personalities that I follow.  You can usually find me on there at some point for a few moments each day commenting, favoriting, and reTweeting.

Then, there is the new venture, the Puck Junk Podcast.  Sal Barry and I have been putting on a podcast on a weekly basis covering everything NHL and hockey card related.  Why?  Well, above all else, it's fun.  Sal and I have had many conversations over the years about things that turn into memorable moments so we finally started to document some of those conversations.  What better way that with audio?  Secondly, there isn't much out there that is hockey centered and focuses on the musings of two hockey fans with no real broadcasting experience and lots of opinions.  Lots.  I mean lots.  Podcast #4 is available now  on Soundcloud if you haven't already given it a listen.  It's still a work in progress but if you have 30 minutes, I could think of worse ways to spend it.

But, I guess the moral of this story is, the blog will be back to partially semi-regular, if not actually semi-regular posts soon.  I just need to stop procrastinating my posts for so long.  I just went through my post log and I found 26 "DRAFT" versions of posts that never got published.  All of them with content.  I don't know if it's a general unhappiness with what I write or just laziness.  I'll probably go with laziness.

And that's all I have to say about that.