New PC Cards, Rare Ones Too

So I hinted last week in my three-card PC post that I had some bigger pull-type cards on their way for my PC.  Well they arrived.

As most people know, I have an Eric Tangradi personal collection that I started back in 2010 when he was a prospect in the Penguins organization.  Now that he is with Winnipeg, I still actively chase the missing links that I don't have.

The problem for me has always been that I am aware of at least a half-dozen other Tangradi collectors.  This poses a problem when searching for cards on the auction sites.  I can't tell you how many times I have gotten into a bidding war with someone and ended up overpaying for a card just because the demand was there (or lost at the last second or just got bid right out of the auction).

One of those collector's periodically puts up many of his/her rarer cards, assuming to test the market.  Up to this point, I have only ever seen them listed for BIN numbers reaching in the ridiculously high stratosphere of values.  I have always watched them, but they have never ended with a sale.  A few weeks ago, some of these cards hit the Bay again, only this time, they were traditional auctions with starting prices of $.99.

After all was said and done, I ended up winning 4 of the 6 auctions I bid on.  The other two just got too rich for my blood.  At any rate, I figured I would share. 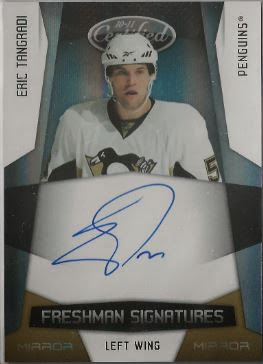 So with a tiered system in any card set, the ones numbered under 50 are next to impossible to find.  I have only seen this gold one pop up a couple times.  I was happy to bid and finally win this one.  I have the basic Silver #/899, the Red #/250, and the Blue #/100.  I just need the Emerald #/5 and the Black #/1.  I have actually found the Emerald recently and am working on procuring it.  We shall see. 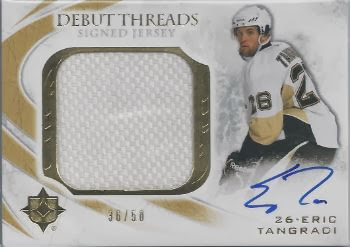 This is another in a long line of "tiered" cards.  These were found as just jerseys, jersey autos, patches, patch autos, and I think there is a black version or something like that.  I know I have the regular Jersey #/200 and the Patch #/35 but I had never seen the jersey auto.  Never.  Maybe I just didn't pay good enough attention.  I did pay for the card though.  And now it's mine. 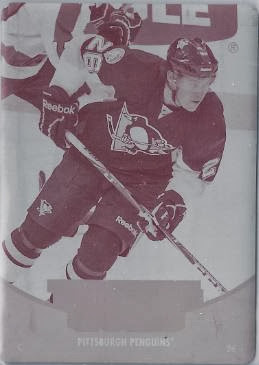 I believe this would be my tenth printing plate.  These never popped up at all a few years ago but then last year around summer time, I found quite a few.  The difference though was that they were all The Cup plates which feature the other releases by Upper Deck (ie. SP, SPx, Black Diamond, Arifacts, etc).  I didn't realize that the basic flagship set had it's own plates outside the realm of The Cup.  The card itself is made of metal (as most plates are) and you can see it on the back (although I didn't scan it).  The corners are rounded too.  There is a sticker identifying it as the actual plate, signed by our friend Richard P. McWilliam. 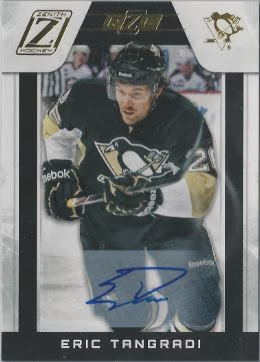 Finally I was able to get my hands on a Zenith auto.  These have popped up on a number of occasions but every time they have a BIN that is well out of my price range.  Not anymore.  This one set me back a whopping $3.  It is numbered out of #/99.  Unfortunately it's a sticker auto although the design of the card had the white space for signing.