New Cards For The Tangradi PC

I have still been picking up Tangradi cards for my PC even though he is long gone from the Pens.  So far this year he has 1 point on 15 shots on goal.  Nothing to write home about but he has thus far only appeared in 11 games.

Just wanted to take a minute and share a few that have recently fallen in my hands. 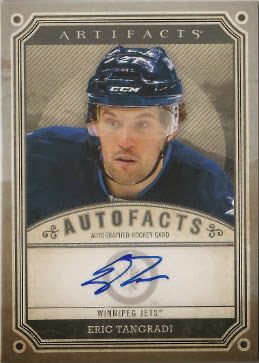 So Artifacts has been out for a while and as most people know, the Autofacts cards are not a one per box kind of thing.  They say they fall about one per every three boxes but for some reason, there are a ton already on the secondary market.  When these first hit the shelves, I was bidding feverishly on the Tangradi's that I would see pop up because I knew that other than OPC, he wouldn't get a lot of exposure in this year's products.  So I bid.  And lost.  Bid again.  And lost.  Continuing over, and over again.  Finally, I found a multitude of $.99 auctions with this card and bid on all of them because at this point, odds were that I'd get at least one of them, right?  Well my plan backfired.  Instead of winning one of them, I won FIVE!! 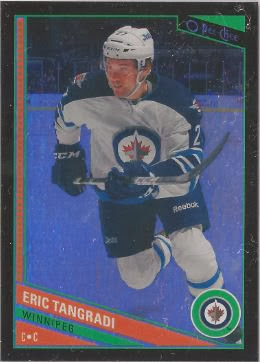 The same scenario as the Autofacts card above went for this one too.  I didn't want to pay more than a few dollars for this and once some of these auctions got over five, I bowed out.  But finally I won one (not five) and all is well with the world. 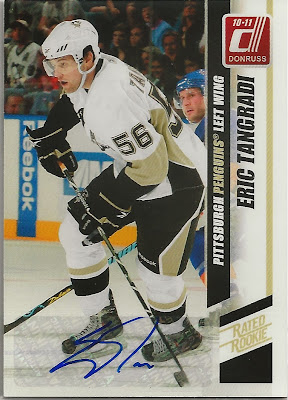 For as prevalent as 2010-11 Donruss was, and still is, this card has eluded me repeatedly.  In fact, I have been monitoring Ebay auctions since I decided to start collecting ET and this card has only come up FIVE times that I can remember.  Each time, the owner wanted an extraordinary dollar value on a BIN price.  I watched these auctions close with no bids and no sales over and over again.  But finally, someone posted a regular auction starting at $.99.  That's how you do it.

That was it for now, just three cards.  I have recently snatched up some BIG ones for the collection from another Tangradi collector that occasionally pops up online.  They are low numbered ones with a 1 of 1 thrown in for good measure.  Once I get those in hand and scanned, I will be sure to share those

...TO BE CONTINUED.
This Post Brought To You By dogfacedgremlin at 7:00 AM