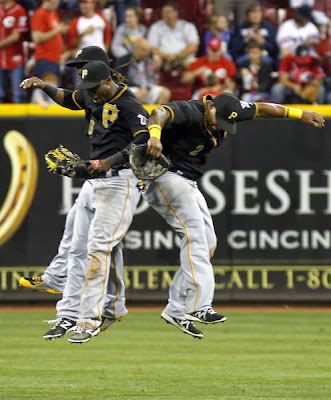 So the last I checked, a bet on the Pirates winning the World Series was an 18-1 shot in Vegas.  Not the best I have seen but still something if you drop a pile of money on it.  But what is the real likelihood of that scenario?

I would say they have the same chance that anyone else has going in but a desire that far outweighs any other single team.  Yeah, I said it.

The curse is over.  Not that we had some superstitious curse or anything silly like that but it has seemed like a curse.  The fact that they made it this far is basically a Pittsburgh Miracle in and of itself when I talk with other friends and family still back in the Burgh.  But you can't deny the fact that they did it playing great baseball.  Despite have a rag-tag bunch of players that most teams wouldn't have given a second thought to, or having only one "star" player on the roster, or having a pitching staff made up of guys that, lets be honest, most casual baseball fans have no idea about, they still won 94 games.

Why?  They do it with great pitching, phenomenal defensive play, and decent offensive production.  They are where they need to be on the field to make the plays, the pitchers seeming know how to pitch to each and every batter they face, and they are able to put enough points on the board to stay in games to win.  So when it came down to the final inches of the season, they went all out, winning enough against the Cubs and sweeping the Reds in the final series.  They knew what they had to do and they did it, securing home field for this pivotal Wild Card game.

They don't care about the things myself and members of the fickle fandom of Pirates baseball say about them on a daily basis.  They don't care about my concerns about their abilities to wake up the bats and provide run support for their pitchers.  They don't care about the sports writers that say they are playing with "house money".  There is no such thing in their clubhouse.  If you ask anyone in that organization right now, they will tell you one thing.  They are playing to win the World Series.  That picture I posted the other day on here of the locker room celebration with all the champagne and beer flowing freely was misconstrued by many people out there.  The Pirates aren't that team that is just happy to be there.  They aren't that team that just squeaked in and are lucky to have survived.  They worked for this and they deserved to celebrate something that hasn't happened in 21 years.

I watched those last few games very intently and paid close attention to the reactions, emotions, and mannerisms of the players as those games progressed.  I finally saw it.  I saw the desire.  I saw the passion.  I saw that raw emotion of guys that new they had something special.  These guys know what they did a few days ago and they are determined to make that last.  So am I.  No longer am I going to sit here and pretend that "just happy to be here" is an acceptable attitude for a downtrodden, broken, and beaten Pirates fan.  This team is for real, and it's World Series or bust.

Let's get this one at home, Bucs!!
This Post Brought To You By dogfacedgremlin at 7:00 AM

Email ThisBlogThis!Share to TwitterShare to FacebookShare to Pinterest
Labels: pirates in the postseason, pittsburgh pirates, the will to win, vegas odds