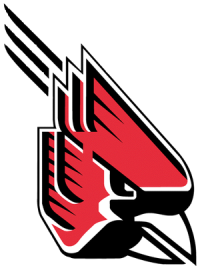 As some of you out there know, I am a Cardinal Alumni.  I went to Ball State from 1995-1999 and pretty much had one of the most eye-opening, thought provoking, entertainingly awesome times of my life.  Much of that experience revolved around the various sporting events the occurred during my time (...although I spent the majority of the time studying and hanging out at the library...).

Those years were very good to be a Ball State fan.  In 1996, the football team won the MAC Conference and got to play in the Las Vegas Bowl (although we lost and to this day haven't won a bowl game).  Men's basketball with Ray McCallum at the helm went on the the NCAA tournament in 1995 and the NIT in 1998.  We sent two guys to the NBA during that time...Bonzi Wells and Theron Smith a couple years later.

Ball State Lacrosse was actually formed while I was there.  At the time it was intramural only but they are now a member of the Men's College Lacrosse Association and the Central Collegiate Lacrosse Association which sees some of the best teams in the country compete.  BSU Men's Ice Hockey was also in it's infancy stages as a club sport.  They will be competing in the Division III of the collegiate club level this year.

So with all that to go off of, I decided that I would make an attempt at building a Ball State Alumni collection that will encompass all sports (men and women).  There have been many professional BSU athletes over the years and it will be a difficult task, I'm sure, to complete a perfect collection.  But I think this will be a fun thing to add some spice to the old PC.

There are many players that have cards out there and there are a ton that were drafted, played a game or two, and were never heard from again.  Because of that, I realize this is going to be a collection of "commons" but should be fun.  If a BSU player is featured on cardboard, I will add them to the collection.

This is in no way a definitive list but some of the players that I will be looking for include:

Bonzi Wells, Theron Smith  (that's it, only two ever!)

Tamara Bowie (only one I can think of)