Since the Pirates have all but completely choked away their chances at a playoff berth, I figured I would show a new card for my PC of a former Pirate great.

This guy has a World Series Championship, multiple batting titles, and a league MVP, a feat that no Pirate player has done since and probably never will for that matter.

I'm talking, of course, of the Cobra...Dave Parker.

Check this sweet little wonder out... 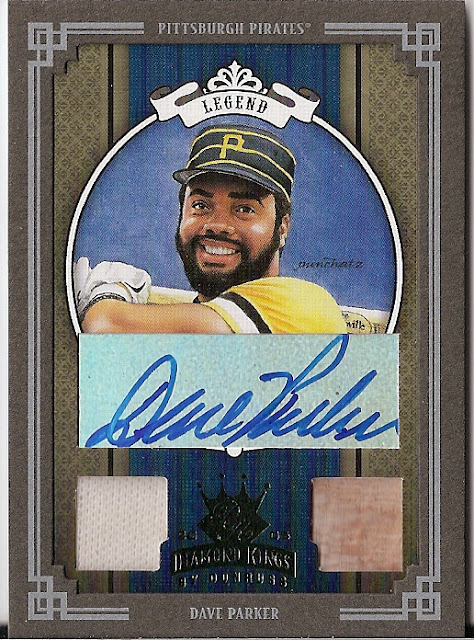 This is my first Parker auto in my somewhat respectable Pirates collection.  It is also my first bat card I believe too.  No, wait.  I take that back.  I have a Willie Stargell Bazooka bat relic card.  But still, this is the coolest.  I pulled it off Ebay, of course, and I think I got a steal on it.  I don't know card values per se but I do know what I like and the fin I forked out for this was more than worth it.  I would have paid triple that (or more).

The card is from the 2005 Donruss set.  It's a Diamond King Crowning Moment numbered out of 25.  I'm not a baseball guy so that's the best I could do with a set designation.  What is really cool about it is the fact that the border is raised up so it's almost like a shadow box effect on the card.  The picture on the card is actually a painting rendered by illustrator Don Ivan Punchatz, who is famous for his lengthy career as an artist of portraiture.  He's been featured in the Smithsonian as well as Cooperstown.

The fact that there is the trifecta of memorabilia (auto, GU Jersey, GU bat) gives this card immediate EPIC status in my collection.  I'm pretty sure this is going out on display in my "sports museum".  I may write about that someday but for now, enjoy the awesomeness!!!
This Post Brought To You By dogfacedgremlin at 7:11 PM