That sad, pathetic display of what they tried to pass off as football marked an end to my 2011 NFL viewing  season.  Call me a sore loser if you will but with all the injuries that have plagued the Steelers this season, it's a wonder how they even made it to a wild card game in the first place.  Big Ben had no business playing any of the last three weeks.  We lost Mendenhall with a blown ACL.  Clark is out with sickle cell-like symptoms because of the thin air in Denver.  Troy has been hurt off and on most of the season, the O-line has been banged up since 2006.  I could go on, and on.

I would like to congratulate the Denver Broncos defense in their decisive victory over the Steelers this afternoon.  I know what you are thinking?  But DFG???  The Denver offense was who put the beating on Pittsburgh.  True.  However no team lead by Tim Tebow will I ever give credit to as long as I live (I don't think that is correct grammar either but what are you, the Grammar Police?).  I am not a fan, never was a fan, and never will be a fan.  Despite his obvious ease at picking apart the battered and bruised backup Steelers D on 20+ yard passes today, I will still borrow a line from Dennis Green and say, he was who I thought he was.  One game will not change that opinion.  Anyone who watched the game saw that anymore than a 3 man pass rush and he crumpled like a piece of paper.  His success only came after both Brett Keisel and Big Snack went down with injuries and never came back into the game.  With no pass rush, he was able to bide time and make the decisions that his slow functioning brain could make.  On one play alone, I counted 8 seconds before a defender was able to get into the backfield.  That's unacceptable for the overall #1 defense and is the reason the game ended like it did.  There, I said it...sour grapes.

But seriously, I don't like hype machines.  I don't like them in any sport or in any aspect of life.  All they do is get people's hopes up for good things and then it makes it 1000x's worse when they inevitably backfire.  Yes I said inevitably because that's what happens.  I'm not saying Tebow will be a bust (although one can hold onto hope) but he can't consistently play cardiac level ball and survive.  He just can't.  If he can pull the same crap on New England next week, I may change my mind a bit but I'll believe it when I see it.  Speaking of believing what you see, what was that thing on his lip?  Is that the syphilis flair up they have been talking about?  Or maybe that herpes he thought he got treated?  I don't know but it looked nasty.

So getting back to my original point, the season is over for me.  If I watch another football game so be it but I will not be making a concerted effort to, not even the Super Bowl.  Most of the teams left, I have no desire to see continue any further so I will now devote 100% of my attention to my favorite sport, women's beach volleyball...I mean hockey, yeah that's it.  Hockey!!

I can't believe we lost to this. 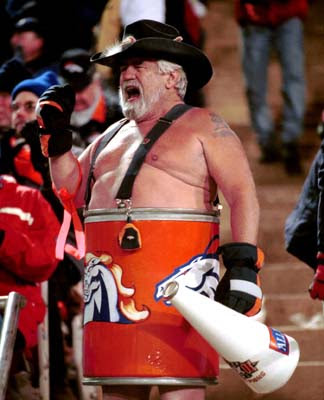 This Post Brought To You By dogfacedgremlin at 9:00 PM

Email ThisBlogThis!Share to TwitterShare to FacebookShare to Pinterest
Labels: i hate the broncos, steelers end the season is disappointment, tim tebow is a tool