Well I could go on about my New Year's collecting resolutions just like every other blog out there but I won't.  I did that last year and after about September or so, I couldn't stick to it any longer.  Why?  Well this year we had two major card shows in my area, the National show, and a host of other smaller events that popped up.  I'm a sucker for a good show and none of these were an exception. 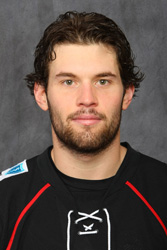 I did begin a new PC in 2011, against my better judgement.  I began collecting Eric Tangradi cards as one of my player collection in addition to Super Mario, Jags, and Billy G.  The first is a HOFer, the second most certainly will be, and the third has more character, integrity, and grit in his pinky finger than 90% of the league ever did.  So how does a minor leaguer with only a few opportunities to move up to the big leagues and a wicked injury to his credit fit into this mix?  I don't really know.

All I know is that Tangradi is a beast of a winger at 6' 4", 232lbs.  He has the potential to wreak havoc in front of the net and a grinders mentality.  Currently, he leads Wilkes-Barre/Scranton with 13 goals and is tied for 2nd in total points with 23.  He made the AHL All Star team last year and has a great shot at making it again this year.  For some reason, though, he just hasn't been able to solidify an extended look in the NHL.  I'm holding out hope for big things to come.

There are a little more than 150 cards for Eric at the moment, 50+ of them are 1/1's.  I've picked up a few out of packs, a couple in trade, and the rest from the Bay.  I'm up to about 32 different cards with a few dupes.  If you want to check out the collection so far, you can go here.
This Post Brought To You By dogfacedgremlin at 7:22 PM