Tomorrow is garbage day...and the first day of the NATIONAL!!

It is.  Wednesday's are garbage days.  Except when there is a holiday prior to the Wednesday.  Then it falls on Thursday.  Which if you ask me, screws everything up because it is one more bag to go to the curb on one week and one less the next.  Speaking of garbage day, I can't forget to take those boxes we got from Costco out to....

Oh, you aren't here to listen to talk about garbage?  Me neither.

Tomorrow is the first day of the National Sports Card Collector's Convention held this year at the Donald E. Stephens Convention Center in Rosemont, IL, just outside of Chicago.  Don't forget the "E" or else you will be at a different convention center where this years NAMBLA convention is being held.  Rather than waste your time speaking about what is on tap for this years show, I will point your attention here for more information.

As some of you are already aware, I finally broke my silence on the subject yesterday and gave the world exactly what they have been waiting for...the confirmation that I will be in attendance on Saturday.  I know, I know.  Hold your applause.  While up until yesterday I was kind of indifferent to the whole thing, after making my decision something changed.  The adrenaline started flowing I think and the ideas of what wonders await me began to consume my thoughts.  What would I pick up?  What would I get to see?  Will I participate in any redemption programs?  Will I get autographs?  Will I go into a coma from the shock of 850,000 square feet of cardboard paradise (or high blood sugar)?  I don't know. 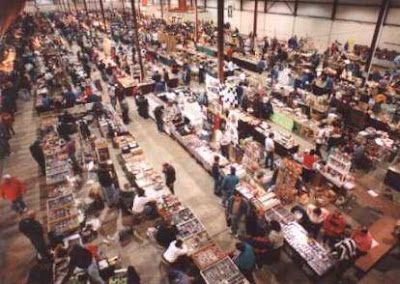 I think one thing that has gotten me back on the right track is the fact that these shows are always a good place to meet other collectors.  There are at least three other bloggers that I regularly communicate with that I will be meeting up with at some point over the weekend to do some real live trading.  I will most definitely be blogging about those later on.  Also, there are quite a few others out there in the cyber-card land that will be attending the event that I plan on seeking out, some with their own booths including Card Connection Radio and Freedom Cardboard.  If you are going to the show and haven't already let me know about it, drop me a line and if you are there on Saturday, maybe we can meet in person and talk some shop, maybe even trade if you let me know ahead of time.  That is probably my favorite part of this whole experience.

Since I am in prep mode at this point, it is always wise when attending a show of this size to have a game plan.  Since I only have about 6-7 solid hours of time on Saturday to do my thing, I have plotted out my goal (although it will probably be tossed out the window within the first 10 minutes).  3 things I plan to avoid to save time/money...

1.  I'm going to pass on the autograph guests.  There are too many good signers there that I can't decide which is the one I want the most so I choose none of the above.  That saves me money, for one and time standing in long lines.

2.  Next are the strictly memorabilia booths and tables.  "Hey, that's cool" or "Whoa, look at that" may be uttered a time or two but I'm skipping them if at all possible.  I'd love to have some nice mounted posters, old school pennants, framed artwork, signed equipment etc. but the reality is I have no space to call my own in order to display them.  I have had a 75th Anniversary lithograph of the Steelers for what seems like six years that is still in a tube without a frame, two All-Penguin and All-Steeler Team Card Displays that aren't properly hung, and a few baseballs and pucks that need a home.  Despite the "Coolness" of all of it, I have other business to attend to. 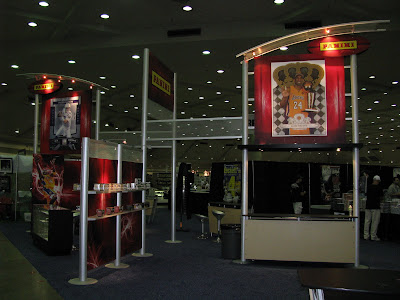 3.  The manufacturer booths.  Again, unless there is simply something I can't live without, I'm walking.  I did want to participate in at least the Panini wrapper redemption promotion so I may have to seek out something off their lists but the other guys do nothing for me.  That means you Topps, Upper Deck, Tristar.  Beckett...you are pretty much dead to me so I will pass all together just as I do at all the Sun-Times shows.  Supply dealers, if you are there and I'm sure you will be, I have already found my bastion for cheap holders/boxes/albums so I doubt you will draw me in with your siren song.

So with those out of the way, that leaves my goals. I only have four.  We will see how this turns out.

1.  2 boxes.  I always look for 2 boxes of something.  That's not to say I only will get 2 boxes, but 2 is my goal.  I have pretty much overdid it with 2010-11 products so chances are I will be looking for something older unless I find something with a rock bottom price.  I'm thinking something in the way of ITG from a few years back and maybe some early 2000s hockey if it exists.  Pre-2005 hockey is sometimes hard to come by at shows unless of course you are talking early 90s, which I'm not, ever.

2.  5 cards for each of my main player collections.  Yes I said 5...each.  That's 15 cards that I need for all three of my main hockey player collections including Jagr, Guerin, and Lemieux.  When you think about it, that isn't unreasonable for a show this size.  Someone has got to have something I need.  As for my other player collections, if I get something, so be it.  If not, it isn't high on my priority list.

3.  At least one autograph or memorabilia card for each of my Pittsburgh team collections.  This goal usually spirals out of control and I end up with more than one or two or ten.  Last big show, I picked up 15 TTM/in person on-card Penguin autographs...23 total if you include the manufacturer obtained ones.  I think I should be able to get a few Steeler and Pirates this time around.

4.  Sell something.  I know this one is almost like trying to find a unicorn in a field of barbed wire but I need to do something.  What better place to make an attempt than with an audience of thousands of collectors and dealers.  I don't anticipate enormous success on this one but I am going to try.  I just need some strategery in setting this one up.  Since I don't possess a Bryce Harper Super Duper Auto Refractarama Chrome Zygote Relic card to sell, it's going to take something rare and unusual to get at least the dealers that claim to buy interested.  I really need to think this one through between now and Saturday.

One things for sure.  I can hardly wait.

Oh, and PS...I actually may Tweet this little event if my phone holds up.  Since I have an account, might as well use it, right.  It's over on the right if you want to check it out.
This Post Brought To You By dogfacedgremlin at 10:43 PM