Remember when the Topps MCG site was all the rage and everyone was clamoring to capture as many code cards as they could?  Of course you do because it was only a month or two ago when it stopped.  Topps also had the same kind of promotion going for their football product as well.

The Gridiron Giveaway, just like the MCG, came to an end not too long ago and I decided to see about having some items sent from my collection.  When the time came for the Million Card Giveaway, I took a look at my collection and realized that there was nothing in there worth having shipped.  Most of my collection was made up of mid-70s and late 80s items that I can find plenty of elsewhere.  My thoughts on obtaining these were further confirmed when I read the countless blog postings about the poor shipping and condition of the cards that others had begun "cashing in".  The Gridiron Giveaway, on the other hand, was different.

I was pretty successful at pulling some older cards from my code cards and after doing a few trades, I amassed a collection of over 50 cards.  But, as with most people's collections, it was again made up of mostly 80s and 90s stuff with a few older cards sprinkled in.  It was those cards that I was targeting.  I decided to have 3 total cards shipped and we would see how we did. 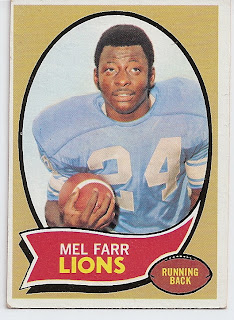 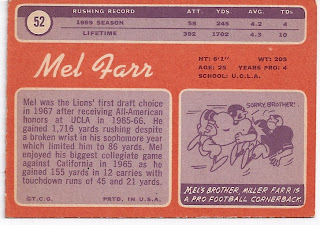 First up was a 1970 Mel Farr rookie card.  Farr, for those who don't know, was a standout half-back at UCLA when he was drafted #7 overall in 1967, spending his entire NFL career in Detroit.  Perhaps more known for his car dealerships rather than his play on the field, Farr built one of the largest Ford dealerships in the country during his retirement.  Those of you from Michigan may remember the Superstar commercials of the mid to late 80s.  The condition of the card isn't really that bad here.  There is a small nick at the bottom left corner and the back of the card has one on the bottom right.  Other than that, it looks pretty decent. 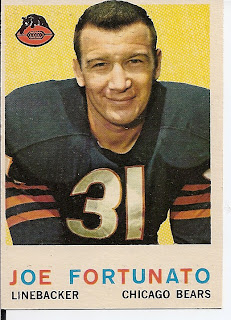 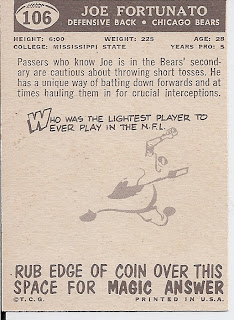 Next up was this 1959 Joe Fortunato rookie card.  Joe was a Bear during his whole career.  He played 12 seasons and then spent two more years as a coach (linebackers coach in '67 and defensive coordinator in '68).  Joe had a very solid career, making the Pro Bowl 5 times and was named to the NFL's top 300 players of all-time.  This card is in pretty great condition for being over 50 years old.  It is a little off centered as you can see by all the white space but has four sharp corners and isn't faded like a lot of 50's cards I see at shows.  2 for 2 in my book so far. 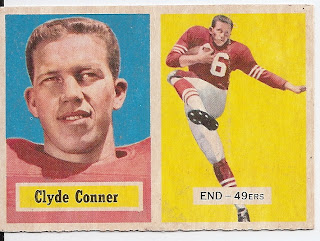 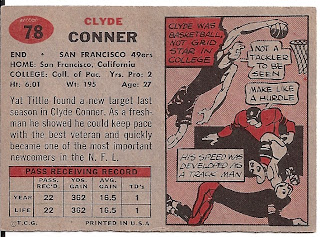 Finally, I pulled the trigger on what is now the oldest football card in my collection that doesn't have a Pittsburgh Steeler on it.  This is a 1957 Clyde Conner rookie card.  Clyde played wide receiver for the 49ers for eight years, his entire career.  Although I can't say I know much about him, from the looks of the back of the card, he seems to have been better know for his basketball skills during his College of the Pacific playing days.  This card was almost like the Fortunato in that it had four sharp corners but the bottom edge, as you can see by the scan, has almost a "deckled" edge to it because of the way it was cut.  Still, it's a nice card to have for a buck (sure they were free but shipping was about a dollar a card).

So did you pick up on my theme yet?  All rookie cards, all from the vintage era, all players played for their respective teams for their entire careers.  I have a ton of respect for guys that begin and end their careers with one franchise.  You don't find that too often these days with free agency plucking guys left and right to the teams with the biggest wallets.  There is something to be said for hard work, commitment, and loyalty to one team.

That being said, if you have any GIG cards that you are debating having shipped, I would say do it based on my experience.  I think everyone has until June 1st to get their orders processed.
This Post Brought To You By dogfacedgremlin at 5:28 PM