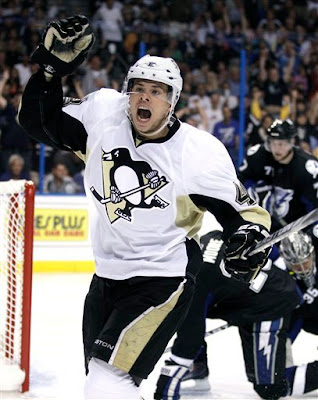 Well, once again there was another Pens game that wasn't on TV and I couldn't have been happier with the result.  I didn't get to catch any of the game live since I was at work until almost 9PM but I did see most of the game on fast forward from a recording.  I just wanted to make a few comments about the game.

First, what happened to the famed penalty kill?  The Penguins were near tops in the league when it came to the penalty kill for the year but since the playoffs began, they have gone into hibernation.  The Pens gave up 2 more power play goals in tonight's game, both of which to Marty St. Louis by the way.  I don't think anyone can stay on that guy because he can just skate under you or around you.  He's like a little leprechaun dodging and ducking under toadstools as he travels to the end of the rainbow.  He is certainly good luck for the Bolts so far this post-season.

Second comment...I can't wait for all the negative press regarding the questionable "hits" in tonights game.

The first was Steve Downie launching himself like a missile.  His target, Ben Lovejoy, with his back to the play behind the net.  Luckily, Lovejoy turned around in time to get pulverized into the boards.  The great thing about the play was that it left the Pens on an odd man rush to the other end which immediately led to a goal by Max Talbot.  But at what cost.  Lovejoy got back up and skated off the ice, Downie was headed to the box if not for the score by Maxie.  Suspension worthy?  I don't know.  I don't care.  It looked brutal.  Would I suspend him?  Probably because I am a Pens fan.  I think Ben is fine so whatever.  Plus, after the Raffi Torres debacle, I hardly think Colin Cambell is going to get it right either way.

Second hit wasn't really a hit.  More of an elbow.  Chris Kunitz, a normally mild mannered, well adjusted player took out some pent up aggression, obviously built up from the Downie hit, and put an elbow right into the back of Simon Gagne's head.  Clearly a dick move by Kunitz, it drew him a penalty and I'm not so sure he is going to get by with just the 2 minutes.  Again, I'm done commenting on this crap because that's what it is...CRAP!  There is no winning an argument because someone is always going to play the victim so I'm done talking about it.  If Kuny sits, fine by me.  If not, still, fine by me.

So despite the potential controversy and water cooler talk (at least in Canada because no one talks hockey around these parts, especially with the Blackhawks riding a train out of playoff town) there was a somewhat decent game that was played tonight.

Fleury, once again, stopped 25 shots, despite seemingly being under pressure way more than in the 5-1 game the other night.  As I said earlier, Talbot got on the board with a rush into the Tampa Bay zone mid 1st period after Downie destroyed Lovejoy.  45 seconds later, Arron Asham made it 2-0.  Tyler Kennedy put Pittsburgh over the top with the game winner just 31 seconds after Tampa tied it in the third.  The Pens take a 2-1 lead in the series as it stays in Tampa for game 4 on Wednesday.

Going forward, if there is any hope whatsoever for the Pens to hang onto this series, they are going to have to fix special teams.  They need to get their mojo back for the penalty kill and for pete's sake, stay out of the stinkin' sin bin.  If you don't give the Bolts the opportunity to screw you with their freakish speed with a man up, you will be much better off when playing at full strength.  As for the power play, or lack thereof, the Pens are now 0 for 15 in the series.  I really don't know what the problem is, other than the obvious absence of Crosby and Malkin.  If that is the only thing keeping them from being at least an average PP team then I guess there is nothing they can do about it.  But something tells me that a re-shuffling of a few lines during the power play could give them the boost they need.

In other news, for all you hockey card prospectors that have been hoarding these for a couple years, Stamkos finally got his first playoff points of his career with an assist on St. Louis first goal.  Also, it was brought to my attention that no one ever got better at hockey by bowling.

Oh, and for the biggest Penguin fan (other than myself) that I know...if you ever read this; Whatever the heck is wrong with you, other than the obvious mental deficiencies I have always claimed you possess, get well soon, little bro'.  Tonight's win was for you (if I was a player, that would have more of an impact I think).

This Post Brought To You By dogfacedgremlin at 10:57 PM