We Are Family...You Just Aren't In It Anymore 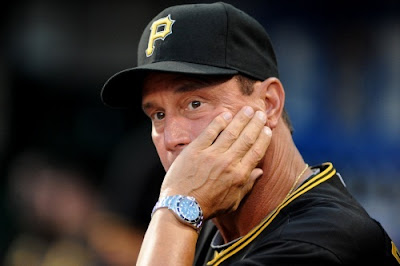 John Russell = FIRED
I'm happy with it.  Not because he is now gone but because they are moving on from a bad situation.  I don't blame Russell for the Pirates season.  It was going to result in this anyway whether it was 70 loses, 90 loses, or 105.  He joined a sinking ship with almost zero chance of righting itself during his tenure and is basically just a victim of circumstance.  My blame goes higher.  I would be happier if they would keep going up the totem pole with the pink slips, like maybe the GM Neal Huntington.  Or maybe team president Frank Coonelly.  Or how about the owner, Bob Nutting.  Can you even fire an owner?

Instead, Huntington made the official announcement, meaning that he, himself still has a job for now.  He said,

"I have a tremendous amount of respect for JR, both personally and professionally.  He took on a difficult challenge, overseeing a major overhaul in the makeup of our team."

Really?  What was that overhaul?  Dump all your talent?  Put a hiring freeze on quality ball players?  Pay people?  It certainly wasn't a change in attitude toward a committment to winning ball games.

My favorite quote came when he said,

"...In the end, we decided that new leadership in the clubhouse would give us the best opportunity to move this major league team forward."

Not "move this team" forward", or "move the Pirates forward".  He said "move this major league team forward", indicating that the rest of America (and the Universe, for that matter) have all forgotten that the Bucs were actually in Major League baseball and weren't just a farm team that occasionally showed up on gameday.


I don't know about the rest of the baseball fans out there but I'm glad the lights are shut off in PNC Park for another year.  My return to actively following my team after a long hiatus was nothing more than a dismal failure and an eye opener to many of the things that are wrong with baseball.  Perhaps next year I will think before getting excited over America's Pasttime because it's way past time for the Pirates to stop losing.
This Post Brought To You By dogfacedgremlin at 12:58 PM