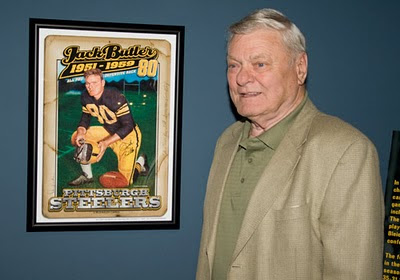 There is a new movement/petition circulating the interwebs that I am finally in agreement with.  I was tipped off to this over on One For The Other Thumb, a Steelers blog that I'm sure all of you out there read on a regular basis.  This year, Dick LeBeau finally got his day to shine in Canton followed by many years of petitioning the hall to open their doors to the creator of the Zone Blitz (although his playing career is what earned him this honor).  So maybe this time it will work too.

"Jack Butler was one of the Steelers corners from 1951-1959. In only nine seasons, he made four pro bowls, averaging just under 6 picks a season (grabbing 10 in 1957 alone) at a time when seasons were only 12 games long. So, it's really no surprise that when the Steelers voted their All-Time team for the franchise's 75th Anniversary a few years back, Butler was among the 33 selected (he was also selected to the All-Time team when the Steelers voted at their 50th Anniversary).

He was second on the list in terms of total interceptions when he retired (and is still 24th on the list - with one less INT than Ty Law, who played 15 16-game seasons, and only 10 less than Dick LeBeau - who played 14 mostly 14-game seasons - with 52 total), and was both an NFL Player of the Decade for the 50's as well as one of the Top 300 of all time. He's still #1 in forced turnover percentage per games played, and 42 years ago today(yesterday), the great Johnny Unitas told Jack's son John (right before dropping 41 points on the Steelers) that Jack was the best defensive back he had ever played against.

In addition to his playing career, he then spent the next 46 years scouting NFL players, 44 of those as the Director of BLESTO (Bears, Lions, Eagles, Steelers Talent Organziation) - one of the organizations that supported what we know today as simply the NFL combine...

...As you surely know, a lot of the older NFL alumni have gotten overlooked by the hall voters as the years have gone on. Players are eligible five years after the date they retire, but if they aren't elected then or shortly thereafter, they can unfortunately start to slip the minds of the selection committee. Which is, of course, why they need people to remind them of hall-worthy candidates.

And so Jack's children have started a movement to get the voting committee to elect Jack as at the very least a Contributor for his 56-year involvement in professional football. They have set up the site Jack-Butler.com (as well as a Facebook page), which has information on Jack's career, along with a guestbook that they are using as an online petition of sorts to show the voters that fans think Jack should be in the Hall along side all of the other legends."

Because he played for a bad team, and the Steelers were awful back then, he gets snubbed year after year.  His 827 return yards off INTs tops all other Steelers, including pick machines Mel Blount and Rod Woodson. Plus, he's the only defensive back of the NFL's 1950s All-Decade Team not in Canton.

It makes you wonder if he had played for a different team, like the Lions, Packers, or Bears if he wouldn't already be in there.  I wonder if this is another example of the "too many Steelers" mentality that has caused many of the Pittsburgh greats to be ignored for so many years.  Just look at the numbers, though.  His stats are very similar to Jack Christiansen if you break them all down and JC was inducted into the Hall in 1970 as a Lion. Now Dick LeBeau is in and he was drafted a year after Christiansen retired, as a Lion.

Jack is considered by many to be one of the greatest defensive backs of all time, but has taken a backseat to many players that cite him as an influence.  So if you feel the same way, help support the cause or at the very least, sign the guestbook and show your support.
This Post Brought To You By dogfacedgremlin at 8:15 AM

Email ThisBlogThis!Share to TwitterShare to FacebookShare to Pinterest
Labels: HOF petition, jack butler, jack butler should be in the HOF, one for the other thumb blog, pittsburgh steelers