For this week's installment of RSM, I wanted to go backwards a bit to showcase a player of yesteryear. With this past weekend seeing the 2010 Hall Of Fame Class inducted, I guess I was feeling nostalgic. Plus, I started reading the book about the Steelers called From Black To Gold written by Tim Gleason, life-long fan and season ticket holder. When I finish it, I plan to put up a review, although I have never done a book review before. Book reports...yes, but not since college and that was many, many beers ago.


I decided this weeks focus was going to be on Ray Mansfield.

The old Ranger, as he was known because of his love for the outdoors, was drafted from Washington in the second round of the 1963 draft by the Philadelphia Eagles. The following year, Buddy Parker, then Steelers coach, was able to purchase his contract for $100. The rest, as they say, is history.
Ray would spend the next 13 seasons with the Steelers, never once missing a game, and earning two Super Bowl rings in his final two seasons. Ray played in 182 consecutive games as a Steeler, which was a team record.  He achieved All-Pro status twice, once in 1972 and again in 1975.


The Ranger was one of the last of the "Old Guard", along with Andy Russell, when it comes to Steelers history.  Some call the era prior to the Super Bowl teams the SOS era, or Same Old Steelers.  After forty years of living in futility, however, the Steelers finally tasted some post season success by winning a Central Division Championship in 1972.  Some people may remember the photo of Chuck Noll being hoisted up and carried out of the Murph on the shoulders of  Mansfield and Jim Clack. 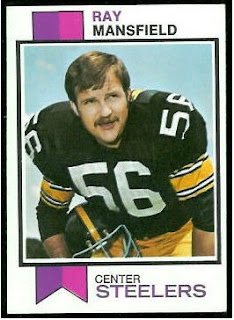 It is not too often that an offensive lineman gets to score in a game but Ray did just that.  In his last season as a Steeler, he kicked the extra point on the Steelers' only touchdown in the 1976 playoff game against Oakland.  The Steelers' kicker Roy Gerela had pulled a groin muscle and Mansfield was listed as the backup kicker.

In 1996, Ray, his son, and a friend were on a hiking trip in the Grand Canyon. Ray had been having some ankle problems that were causing him to lag behind. After telling the others he would catch up with them at their basecamp later in the day, the others hiked off. He never returned to the camp. 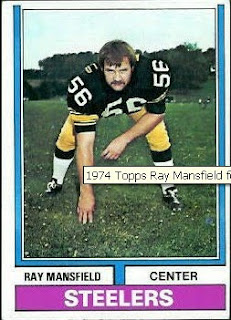 The next morning, his body was found sitting against a boulder that would have been facing in the direction of the sunset the night before, water bottle in one hand, disposable camera in the other. Ray had passed due to congestive heart failure, no doubt enjoying the nature that he loved. He was 55.
Ray is not currently in the Pro Football Hall of Fame, nor is it likely he will be.  He really doesn't have the career stats that could put him in there with the likes of Clyde Turner, George Musso, Jim Otto, or Dwight Stephensen at his position.  But there is no denying that his solid play for the Steelers over his 13 years laid the groundwork for 44 years of solid play at center.  44 years with only 4 players at that position!!!  His successors..."Iron" Mike Webster (HOF, 1997) who was under Ray's wing for his first two years in Pittsburgh played from 1976-1988, Dermonti Dawson played from 1989-2000 and was on the HOF ballot for 2008, Jeff Hartings played from 2001-2006.  We won't discuss what happened after that. 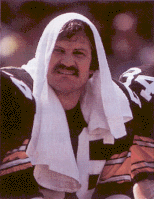 Mansfield was inducted into the University of Washington Athletic Hall of Fame in 1995 and posthumously enshrined in the Washington State Sports Hall of Fame in 1997.
As for cards of Ray, Beckett's checklist only lists 21 cards.  Upon further review, two of them were a different Mansfield and one was the main list.  So in all, he has 18 officially released cards.  Since most of them are oddball cards ranging from local radio/tv station sets to soda pop tops, you can imagine they are pretty scarce.  These are the only ones that I have found over the years at various dealers, shows, and through trades.
This Post Brought To You By dogfacedgremlin at 5:11 PM