A Little Commentary on Kovy 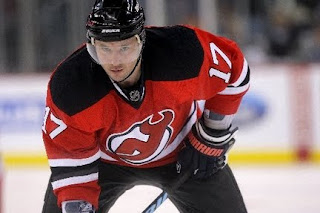 (Eye of the Tiger, boys. Eye of the Tiger.)
By now I think most hockey fans (and non-hockey fans since it is being covered by TMZ) know about the whole Kovalchuk fiasco in New Jersey.  For those of you in the dark, let me do my best at grossly overexaggerating the facts and list the events leading up till now.

Free Agency opens with Ilya Kovalchuk as the highest sought after forward on the list.  There are numerous teams that are interested in his services, many of them a bit gun shy for his contract.  The front runner in all this turns into the LA Kings.  Kovy even goes out there to meet with team owners/management, who wine and dine him and give him the "full LA treatment".  Excited about his prospects, he may or may not have run his mouth about certain things, thus creating a frenzy of "will he or won't he".  Meanwhile, back in Gotham, the Devils sit quiet and do nothing.  No comments, no offer sheets, the virtual appearance of a defeatist attitude of a team on the edge of a decade of rebuilding.

Fast forward a month.  The Kings have been an on-again, off-again contender for the last 30+ days and no one really knows more than sheer speculation and conjecture.  Then comes the bombshell.  Out of nowhere, reports fly that Kovy is staying put and will basically retire in Green and Red.  Where did this all come from?  No one discussed the possibilities of him actually staying in New Jersey.  I was all but convinced the Pens would finally be able to put being swept last season by the Devils behind us.  But here we are.  He is back...or is he?

The deal was probably the most ridiculous I have ever seen.  Essentially, it was a 17 year, $102 Million contract.  And you thought Hossa made out in his deal...  Not so much the money aspect, but the time involved is what blew me away.  He rejected a 12 year, $101 Million contract from Atlanta just to give himself an opportunity to go to a contender.  They traded him to New Jersey in February and he did what he was paid to do.  I can't help but think that this was his motivation to rub it in the face of the Great Ape and his 13 year $124 Million he is getting in Washington.  Both hailing from Russia, Kovalchuk will now earn more money than Ovie over the next six seasons with an annual cap hit of $6 Million.

Now obviously, there is no way on Earth Kovy will be playing at the ripe old age of 44 (Who does he think he is, Chris Chelios?).  He isn't going to play for 17 years and I highly doubt his annual average salary will be as low as $6 Million.  But what can anyone do about it?  The collective bargaining agreement and salary cap requirements hardly give the NHL any recourse to do...STOP THE PRESS, THERE'S MORE!!

The NHL has, today (or yesterday, I don't know), REJECTED the deal saying that it is a circumvention of the CBA.  "Under the CBA, the contract rejection triggers a number of possible next steps that may be elected by any or each of the NHLPA, the Player and/or the Club.  In the interim, the player is not entitled to play under the contract, nor is he entitled to any of the rights and benefits that are provided for thereunder.  The League will have no further comment on this matter pending further developments."  All that from the mouth of NHL Deputy Commissioner Bill Daly.

So in layman's terms, this is a retirement contract.  The Devils aren't the first to offer it, probably won't be the last either, but this kind of thing is done all the time for franchise type players so that they can retire on their teams but not let thier waning years affect the team cap.  In this example, Kovy would get $95 million over the first 10 years and $7 million over the remaining 7.  You do the math.  You can see why I said earlier that I doubt he would only make the $6 million New Jersey would be on the hook for based on cap space.  For you legalfiles, here is a link to the CBA and you can read it yourself.

The league felt that this deal was way too overloaded in the first decade and the only way they were allowing it is if it were restructured.  We are most certainly going to see the NHLPA filing a grievance with the league on behalf of Kovy because, I'm pretty sure he liked that contract.  But until that happens, the contract is dead until an arbitrator makes a decision.

This ultimately raises some questions.  The NHL has thus far, done nothing to stop these types of contracts up to this point.  We have all seen players like Hossa in Chicago or Franzen and Zetterberg in Detroit sign these deals with little fanfare and no peep from the league.  Now with a high profile player like Ilya, they finally decide to step in and act.  Seems a little fishy to me, doesn't it?  What can the NHL and NHLPA do to correct the salary cap issues and fix the CBA?  More importantly, is this going to be the catalyst for another labor dispute and the dreaded "L" word (not the Showtime show)?  With the momentum the NHL has been gaining in popularity, I sure as hell hope not.
This Post Brought To You By dogfacedgremlin at 9:14 AM