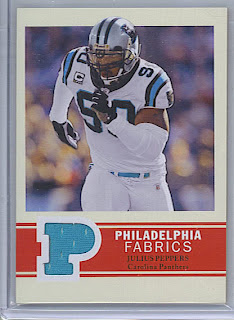 In the latest of the "Over The Hill" gang firings, it looks like Julius Peppers is now out of a job from Carolina.  Well technically they didn't cut him loose but they might as well have.  They opted not to put the franchise tag on him, making him an unrestricted free agent.


Peppers had 10.5 sacks last season and 14.5 the year before.  Hardly the work of a player in his waning days of his career (although his 2.5 in 2007 was quite forgettable).  If the Panthers would have kept him, he would have cost over $21 million for 2010 and they just weren't willing to risk it.


So what do these last three (Tomlinson, Westbrook and Peppers) have in common?


They all turned 30 recently.  What is it about that number...30?  Are guys suddenly incapable of performing once they turn 30?  Are their bodies suddenly no longer able to compete at the high level of play in the NFL?  I do know this, I bet I can count on one hand the teams that won't be interested in him this off-season.  I think he is going to have to be willing to take a pay cut in order to play, but play he will.  Maybe Atlanta?  Possibly Tampa Bay?  Maybe Pittsburgh?  NOT!!
This Post Brought To You By dogfacedgremlin at 11:26 PM