I Am Not A Role Model 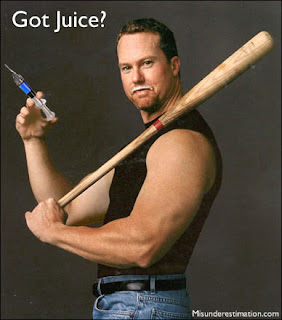 Now that I have my original baseball card collection (well most of it, anyway) I was pondering all the guys I admired enough to spend just a little more time collecting more than the others. Let's go through the list, shall we...

1. Jose Canseco - My favorite player growing up. By far and away, the largest assortment of cards in the boxes with the players already sorted. There were some gems including some non-licensed stuff that is pretty hilarious.

2. Barry Bonds - My second favorite player. Bonds was awesome to watch. I remember going to a game at Three Rivers back in 88 for our little league and meeting a bunch of guys like Bonds, Bonilla, and Van Slyke. Bonds couldn't have been nicer. I remember thinking he was small compared to Bobby Bo. Go figure.

3. Mark McGwire - The second half of the original Bash Brothers. He was the Ying to Canseco's Yang. I had to collect him as a compliment to my Jose's.

4. Gary Sheffield - I always liked Gary's game play. Plus, he was easy to collect back then because no one else wanted him.

5. Albert Belle - He was one of my up and coming favorites. Plus he had two different names, depending on card company (Joey or Albert). I always like the fact that he was smiling in all of his picturs. Turns out he knew something the rest of us didn't.

6. Ken Griffey Jr. - Griffey was a staple to anyone's collection back in the early 90's. Plus, for me, he was a hometown kind of guy, having been born in Donora and all. I grew up right across the river from there. I think Stan Musial was from there too.

Does anyone see a pattern here? All I need now is for Junior to admit to something ridiculous and I will have completed the cycle. Other than Griffey, for some reason or another, I was drawn to egomaniacal, self-absorbed, cheaters. Allegedly.
This Post Brought To You By dogfacedgremlin at 10:54 PM