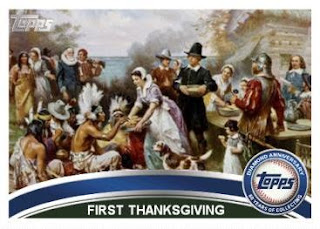 Thanksgiving is a time to reconnect with family and friends.  It's a time to not only celebrate the beginning of the holiday season but also to reflect on all the things that have brought joy and cheer to us throughout the year.  But enough of that sappy, sentimental crap.  Since this is a card/sports blog, here is what I am thankful for in relation to this great hobby of ours.

5.  I am thankful that the card companies are all finally starting to wise up to the fact that the blogging community of card collectors are not going away.  This past year, especially, the manufacturers have began paying attention to the blogs, listening to the suggestions of collectors and taking heed to the voice of the hobby.  Many of them have established their own blogs in addition to taking advantage of Facebook, Twitter, and the other social media outlets that are available.  It is a new age in card collecting and they are finally realizing they need to get out of the 80s.  Although there are many things broken with the hobby, this is probably this biggest step in the right direction in many, many years.

4.  I am thankful for (and you may chastise me as you wish) my local card shop.  Although the brick and mortar store of old has become as rare as the blue footed booby, those of us fortunate to have one nearby (that being a relative term) still use it to our advantage.  I have used my shop to meet other collectors, talk about the hobby, trade with collectors, increase my collection, and of course pick up those ever elusive supplies that I need almost too regularly.  Despite the draw to buy online and save the money, I'm still old fashioned in that I like to see it, touch it, and open it right there amidst the glass cases of cardboard heaven.

3.  I am thankful for the fact that it would appear, at least on the surface, that card redemption programs seem to be on their way out or at the very least, gearing for an overhaul.  Although there are still many manufacturers that still put them into packs to the chagrin of us collectors, it seems they are getting less and less over the last three years.  I'll clarify this by saying that my experience is 95% with hockey products and there are only two manufacturers since 2010-11 and only one since 2005.  While I have had a better than average experience with getting the cards back from the manufacturers, we all know that many of you have not.  Of course my biggest gripe has always been the expired redemptions.  I'm not a "big hit" collector but there is nothing that bugs me more than pulling a redemption that could have been an auto or GU of someone highly collectible only to find out that they are sorry but they can't honor an expired redemption.  But nonetheless, it seems it may be close to running it's course.  We can only hope, right?

2.  I am thankful that I have the privilege of being a Pittsburgh sports fan.  Let's face it, we have some storied franchises in the Burgh that have great tradition and a long history of championship caliber competition.  We have a 3 time Stanley Cup winning team currently with some of the best talent in all the NHL.  These guys are young, highly skilled, well coached, and very entertaining to watch.  They put a great product on the ice that continually sells out each and every night.  We have a 6 time Super Bowl championship team that, at least right now, appears to be primed for at least another playoff run.  They have been in the playoffs 26 times, most of which in my lifetime, won 20 division titles, and 8 conference championships.  We also have a baseball team (originally I ended it there but...) who believe it or not, do have 5 World Series rings.  Sure they haven't fielded a winning team since I was in middle school but that's no reason to fret.  I have had an opportunity to see some great players come up through the ranks, developing into solid star players (for other teams).  I have no ill feelings toward the Pirates though.  It makes it easy to be a team collector when no one else out there wants anything to do with their cards.

1.  Most of all, I am thankful for all the great people I have talked with, emailed, met, traded with, and interact with on an almost daily basis in this awesome hobby.  The people that blog are some of the nicest, most grounded, down to earth people you will ever meet.  Since starting this blog in 2009, I have grown my collection 10 fold and it is mostly due to the blogging community.  Everyone is generous and eager to help other collectors out (I should follow their lead sometime when I grow up).  I never thought that this hobby and blogging experience would amount to much other than a creative outlet for my compulsion (which it has) but it has also brought me some great friendships.  I am glad I have carved out my own little piece of this great community of ours.


I encourage anyone else, both blogger and reader to share what they are thankful for in this hobby.  If you have a blog and published a post like this already, put the link in the comments.

Happy Thanksgiving everybody!!
(unless of course you are in Canada then I say to you, Happy Thursday)
This Post Brought To You By dogfacedgremlin at 5:00 AM 1 comment: Links to this post

Email ThisBlogThis!Share to TwitterShare to FacebookShare to Pinterest
Labels: happy thanksgiving, what I'm thankful for

End of the 1st period...Crosby already has 1 goal and an assist to boot.  He's got 4 shots on goal and he has been cross checked in the back and blasted into the boards...no one got upset, no one made a fuss, life goes on.

Just because I thought it was pretty funny, here's a video from Benstonium.


End of the 2nd Period...Crosby gets another assist on a sweet stuff goal by Malkin.  Pens are up 4-0 (I know it's just the Islanders but so what?).  He's only logged just under 12:00 minutes but if you are watching this game at all, you will know that he is working hard every second he is out there.  The instincts are still there, the power is still there, the speed is still there.  The only thing missing is the stamina but give him a week or two and that will be back too.  This team could be lethal.

If you missed "The Goal", relive it here.

Email ThisBlogThis!Share to TwitterShare to FacebookShare to Pinterest
Labels: crosby is back, pittsburgh penguins

Crosby Returns To The Ice, Finally (FOR REAL THIS TIME!!!)

After 61 straight games of being absent from the line-up, Crosby will finally take the ice Monday against the Islanders.  CES will most definitely be a rockin' place to be and I wish I could be there to see it.  My guess is that whatever game is on TV that night will be trumped just for this moment the world has been waiting for.

I, for one, am glad that we will no longer have to see constant interviews and media scrums questioning Crosby's availability, health, stamina, head-aches, black outs, dry-skin, foot odor, and the occasional not so fresh feeling he sometimes gets.  It is time to put away the rumors and conjecture regarding his ability to bounce back, his wasted potential due to injury, and the idea that he would prematurely retire.  I'm not going to compare this to when Lemieux fought through injury after injury, as well as beating cancer to come back on the ice because it isn't the same thing.  But for this generation of Pens fans (and the hockey world as a whole) it is pretty darn close.  Love him or hate him, there is no denying the impact Sid has made on the game in his short NHL career. 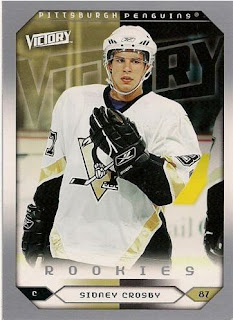 (More on this card here later)
So now that he is back, the struggling Pens can finally get back on track.  I mean, there was no way they could have won without him, right?  WRONG!!  The Pens have been playing some of the best hockey in the entire league through the first 20 games, going 11-6-3.  They are tied with Philly for the most points in the East.  My questions now center around one central theme, How long is it going to take?  How long to get his legs under him?  How long to get back to the elite level?  How long before his line gels with him?  How long before will be blasted into the boards for the first time?  Is he going to hear footsteps every time he goes after a puck?  And most importantly...will he ever learn to grow facial hair correctly?

The first game back should be a good test to see where he is health-.  The Islanders are basically back to, well, Islander hockey.  They have won two games in the last 13 including a 6-0 shellacking against the Bruins on Saturday.  With all the issues they have been having, it should make for an interesting matchup.  I'm not going to be the leader of the Lord Stanley chant any time soon but I can't help to think of how much better the Pens might look going forward. (barring another injury, of course.)
This Post Brought To You By dogfacedgremlin at 4:33 PM 3 comments: Links to this post

Email ThisBlogThis!Share to TwitterShare to FacebookShare to Pinterest
Labels: crosby is back, pittsburgh penguins

Crosby Returns To The Ice, Finally!!! 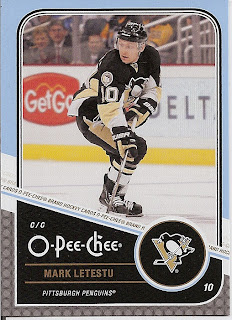 I think the latest fuel that's been added to the fire was yesterday's trade of Mark Letestu to the Columbus Blue Jackets.  Are the Pens clearing a roster spot?  Maybe.  Maybe not.  But I do know this...Ray Shero up to this point in time has been a trading/waiver wire/drafting genius.  Until he screws up royally, I trust he knows what's best.

Mark was a decent guy for most of his Pens career but this year has just stunk up the joint.  Plus with Staal, Malkin, some injured guy, Jefferey, Adams, Vitale, etc., playing time would be at a premium on the front lines.  He claims he is happy about the trade.  Wouldn't you be?  Going from the best team in hockey to the worst team in hockey.  I know I would.  Um, wait a minute.  What?  Oh, yeah that's it.  He wanted more playing time.  Well he's guaranteed to get it in Ohio.  I'm pretty sure he will turn out to be a decent contributor as well.  He even already has a goal in his first game.

In return, the Pens got 4 felt tip markers, a broken Ouija board, and some half eaten Jell-O pudding cups.  Sounds fair to me.  I mean, that's more than they got in the Jagr trade.  Just kidding.  They got a fourth-round pick in next years draft, which, by the way, will be held in Pittsburgh.  The team now has 8 picks in the 2012 draft.

Hey, maybe this means Tangradi will get a phone call.  What's that you say?  He did get the call?  Why yes.  Yes he did!!  Don't blow it this time, kid.  You are the leading scorer on WBS, 12 points in 12 games, top 10 in scoring in the AHL, don't let it go to your head.  Work for it!
This Post Brought To You By dogfacedgremlin at 9:00 PM 2 comments: Links to this post