All's Quiet In Toronto. But Everywhere Else In The NHL...Complete Craziness (updated)

(This is a frequently updated post that had stuff added and subtracted from it all day.  Live blogging is hard. Updates from the original were all in Red.)

Today is the day, kiddies.  It's the NHL Trade Deadline and all the hockey world is a buzz over what has already transpired pre-deadline and what will happen today.  So far, nothing has transpired in the wee hours of the morning but the bulk of the action generally doesn't start until 10 AM-ish.

The biggest question marks are still out there. One of the biggest is what will happen with Martin Brodeur? 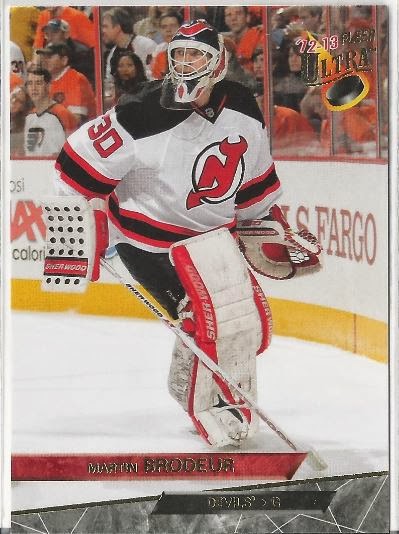 Brodeur's legend is already set.  His impact on hockey will be heard by generations to come and his legacy is almost assuredly set for the Hall of Fame.  So why, then, would the Devils unload him?  Because Marty isn't Marty anymore.  He is actually one of the worst goalies statistically this year.  He is toward the bottom in most categories and even though he is still squeezing out wins, that has more to do with the offense than his play making ability.  He says he wants a shot at another Cup but the likelihood of him getting significant ice-time with any of the contenders out there is slim.  There are actually rumors that Pittsburgh would be interested at the right price, ensuring Fleury had an able backup in case of another playoff meltdown.  I don't see it but we are talking about Ray Shero here.  He never ceases to amaze.

So what has happened thus far? 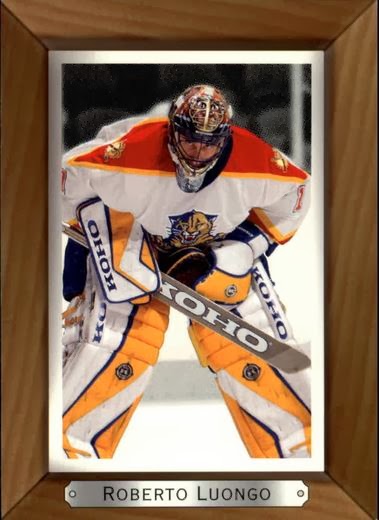 Yesterday Vancouver unloaded Roberto Luongo back home to Florida in exchange for Jacob Markstrom and Shawn Matthias.  Roberto was in shock as his interviews have shown, Vancouver fans were in shock as their team seems to be imploding, and I think even Florida was in shock they were able to pull this off.  Even though the Canucks were interested in dealing Lu last year, I don't think anyone ever thought it would happen.  Florida is trying to build a winning team and now they have a top tier goaltender to backstop them into a playoff position (Tim Thomas was hardly that piece).  They have tons of young talent and a budding defensive corp that could surprise people very shortly. 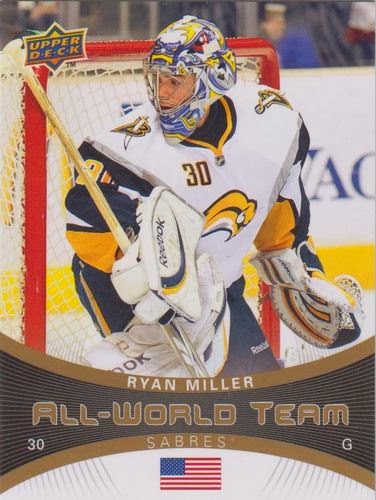 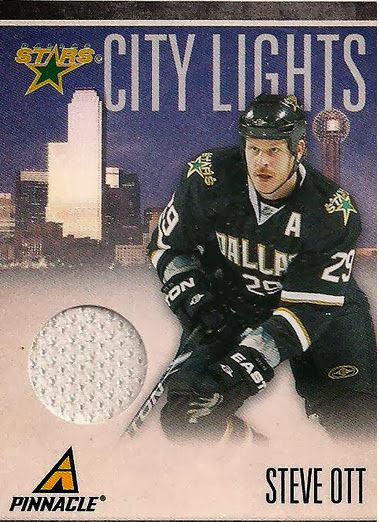 On February 28th, the blockbuster trade exploded the NHL world when the Buffalo Sabres unloaded their franchise goalie, Ryan Miller and team captain Steve Ott to the St. Louis Blues for a bag of rusty nails and a couple draft picks.  I kid but almost.  The Sabres get Jaroslav Halak, forward Chris Stewart, William Carrier, and a 1st rounder next year and a 3rd rounder in 2016.  There have been serious criticizm on both sides regarding this trade.  St. Louis gave up a lot to get Miller and some question whether it was worth it.  I say yes.  The Blues need a little extra between the pipes.  Halak was not that guy.  In fact, he isn't even the guy in Buffalo apparently since he is still on the trading block after moving to the Sabres less than a week ago.  It will be interesting to see if the Blues found that piece they are going to need to boost themselves deep into the playoffs.

We've also seen Martin Erat and John Mitchell join Phoenix from Washington in exchange for Rostislav Klesla and Chris Brown.  The Coyotes also unloaded David Rundblad and Mathieu Brisebois to Chicago for a draft pick.  Viktor Fasth moved from the Ducks to the Oilers in exchange for a draft pick.  This was a move done to replace the enigma, Ilya Bryzgalov who was sent to the Wild.  The Ducks also unloaded Dustin Penner to the Capitals and picked up Stephane Robidas from Dallas.  The Blackhawks, in addition to adding the guys already mentioned, also unloaded Brandon Pirri to Florida and picked up Brian Connelly from the Wild in exchange for Brad Winchester.

The biggest guys on the board all have the potential to make an impact if they get dealt today.  Let's see who's left.


Thomas Vanek - LW - NY Islanders
Vanek goes to Montreal!  Wow!!  That's big for the Habs.  No one was even talking about the Canadiens as a potential team.  The Habs gave up a 2nd round pick and prospect Sebastien Collberg.

Matt Moulson - LW - Buffalo
Moulson and Cody McCormick are both heading to Minnesota in exchange for Torrey Mitchell and an undisclosed draft pick.

Ryan Callahan - RW - NY Rangers
Callahan was sent packing to the Lightning in exchange for Martin St. Louis, in addition to giving up a 1st in 2015, and a 2nd in 2016.  If the Rangers get to the finals, the 2nd round becomes a 1st.  If Callahan resigns with Tampa, the Rangers will get a compensatory draft pick.

Ales Hemsky - RW - Edmonton
Hemsky is heading to Ottawa for a couple of draft picks.  Reports early are a 1st round pick and a 3rd rounder.  The Oilers are retaining half of Hemsky's salary for the season.

Marian Gaborik - LW/RW - Columbus
Go west young (or not so young) man.  Gaborik gets a boost by being traded to the LA Kings in exchange for Matt Fratin, a 2nd rounder and a 3rd rounder.

Nick Schultz - D - Edmonton
Nick is going to the Columbus Blue Jackets.  This frees up some money in Edmonton and moves along a player that arguably lost a couple steps.  This also helps Columbus fill a few injury holes.

David Legwand - C - Nashville
He played his entire career in Nashville but being a UFA did him in.  He waived his "no-trade-clause" and Detroit picks him up to help fill in the injury spaces in the Motor City.  They give up Patrick Eaves, a "prospect", and a 3rd rounder.

Tim Thomas - G - Florida
Thomas is packing his bags for Dallas.  So much for a Luongo/Thomas goaltending duo.  Not sure what Dallas is thinking here other than just getting some experience.  Or maybe Mark Recchi is trying to create Boston South.

Andrej Meszaros - D - Philadelphia
Meszaros is shipping up to Boston.  They gave up a 3rd rounder in 2014 to get him.  This should help with Seidenberg out for the season. 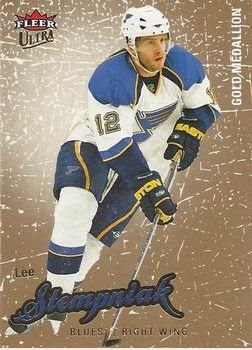 Lee Stempniak - F - Calgary
The Penguins picked up Lee Stempniak in exchange for a 3rd rounder in this years' draft.  Lee brings more scoring ability to the bottom lines and gives the Pens a boost coming down the stretch.

Martin St. Louis - RW - Tampa Bay
St. Louis was sent packing to the Rangers in exchange for Ryan Callahan, a 1st in 2015, and a 2nd in 2016.  If the Rangers get to the finals, the 2nd round becomes a 1st.  If Callahan resigns, the Rangers will get a compensatory draft pick.

Brad Boyes - F - Florida
Boyes agreed to terms with the Panthers to stay another two seasons.  He's officially off the board. 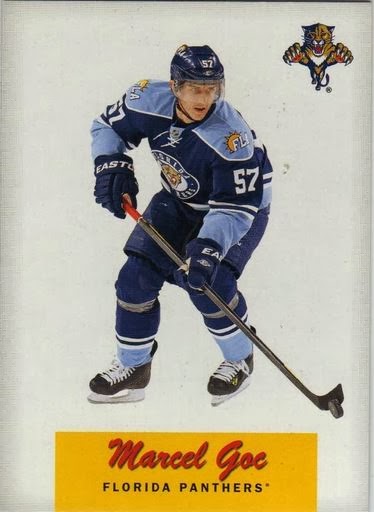 Marcel Goc - C - Florida
The Penguins made their first move by acquiring Marcel Goc from the Panthers.  They give up a 3rd and a 5th rounder to get Goc.  With a solid top 6, it makes me wonder what the plan is here.  Is this just solidifying the bottom two lines...is this a smoke screen for something bigger??

Tuomo Ruutu - F - Carolina
The New Jersey Devils pick up Tuomo Ruutu from Carolina to compliment a group of aging NHLers.  Andrei Loktionov goes to Carolina along with a conditional 3rd rounder in the 2017 draft.

And many, many more.  Of these 36 guys I listed, I would not at all be surprised to see 20 of them moved before the deadline hits. Morning skates are going to be an interesting thing to watch this morning.

**Raphael Diaz heads to the Rangers to help boost a defense that needs some depth.  They only gave up a 5th rounder to get him.

**Corey Potter is heading from Edmonton to Boston.  Their defensive woes are getting patched up quickly in Boston.  They picked up Potter from waivers.

**Jaroslav Halak moves for the second time in a week as Buffalo continues to clean house and sends him to the Washington Capitals along with a 3rd rounder in 2015.  The Caps apparently have given up Michel Neuvirth and d-man Rotislav Klesla.

**Cory Conacher goes to Buffalo off the waiver wire.

**YOUNG PROSPECT TRADE:  Brayden McNabb and Jonathan Parker go from Buffalo to Los Angeles along with two 2nd round picks in exchange for Hudson Fasching and Nicholas Deslaurier.

**Devan Dubnyk goes to Montreal in exchange for future considerations.  I guess Carey Price is more hurt then we thought.
This Post Brought To You By dogfacedgremlin at 6:00 PM No comments: 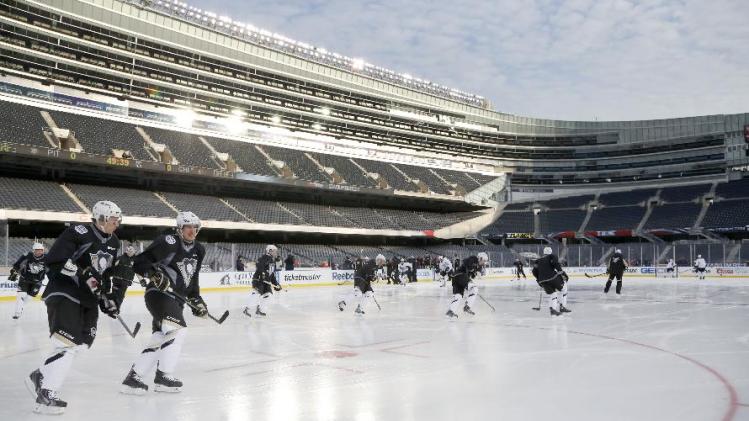 The Penguins continue their march to the playoffs tonight in Chicago against the Blackhawks.  This game is different though.  It's part of the NHL Stadium Series and will be held in Soldier Field.  But don't mistake this for the pomp and circumstance of some ceremonial type game.  This is a regular season battle that has little potential playoff implication at this point but is important for both teams nonetheless. These two are probably the best two teams to date in the 2013-14 season to face-off on the outdoor ice.  The Penguins lead the Metro division by a mile and a half and lead the East by 5 points.  The Hawks sit tied with St. Louis for the lead in the Central and are tied for 3rd in the West.  Both teams also have 84 total points.  Both teams lead their conferences in goals-for.  But the biggest nod to this being a huge game, both teams have won 3 of the last 5 Stanley Cups and both teams are top considerations for winning it this year.

The Hawks need a win.  Over the last 10, they are 3-4-3.  This game could give them the momentum to push them toward a strong finish.  The Pens, on the other hand, have gone 6-2-2 in their last 10, losing the other night in a SO to Montreal.  This is a Nationally televised game on NBC, which have traditionally not boded well for the Pens.  In addition, they are dealing with injuries to Letang and Martin and there is a mystery looming as to what Shero is going to do before the trade deadline.


Regardless, this is a big game.  The media has been hyping it up in Chicago for months.  It was front page news in most area papers.  Ticket sales have slowed but secondary market prices have launched into the stratosphere.  There will be fireworks, explosions, rock music, a fly-over, NHL legends looking on, and with any luck there will some inclement weather to make it an interesting event inside a giant snow globe (there's snow in the forecast...).
This Post Brought To You By dogfacedgremlin at 11:23 AM 1 comment: