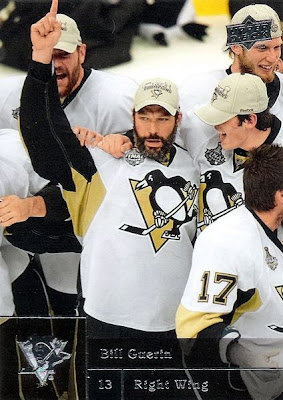 One of my favorite all time players and subject of one of my player personal collections, Bill Guerin was elected to the USA Hockey Hall of Fame in its 2013 induction class which is both an honor and well deserved accomplishment.

Now a player development coach for Pittsburgh, Billy G. is probably the most accomplished American-born player that hasn't already been enshrined in the Hall.  Take a look at a snapshot of his career.


That last one is significant to Pens fans that remember Game 2 of the 2009 Eastern Conference Finals against cross-state rival Philadelphia.

Congratulations to Bill Guerin and his family!  Keep up the great work you do for hockey and the Penguins organization.

This Post Brought To You By dogfacedgremlin at 6:00 PM No comments:

Just thought I would share a one card post of my latest PC card for my Eric Tangradi collection.  Most of you know that he went to the Jets this past season but I still think he has the potential to make an impact in the NHL.  Now in Winnipeg, he will at least get the opportunity for a couple more years.  He signed with the Jets for two more years for about $1.3 million.

Here is my latest card.  It's graded, but I don't care.  I wanted a high grade Young Guns card and now I have one. 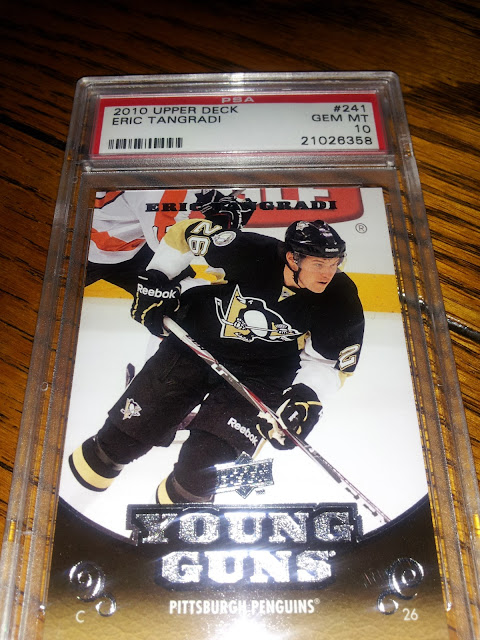 This Post Brought To You By dogfacedgremlin at 7:00 AM No comments: 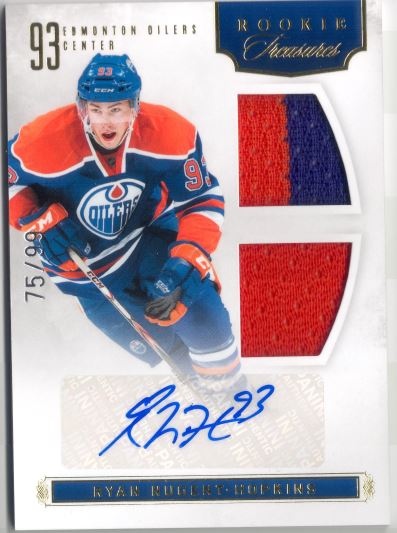 Probably my best pull ever, value-wise at the time.  RNH has lost some hobby steam but it's still a pretty nice card.
This Post Brought To You By dogfacedgremlin at 7:00 AM No comments:

Hockey Hall of Fame 2013 Inductees And Their Hobby Power

Now that most of the hype has died down regarding the new 2013 inductees into the Hockey Hall of Fame, I wanted to throw in my 2-cents worth (it's probably less than that in Canadian).

This year, the Hall is taking four former players and one in the builder category. 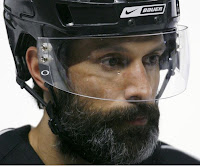 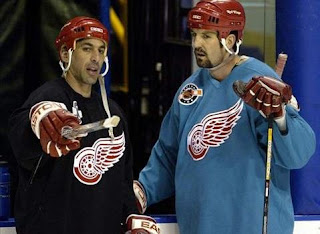 Scott Niedermayer, Chris Chelios, and Brendan Shanahan will be joined by the third female hockey player to be inducted, Geraldine Heaney, and the great innovator and coach of the Flyers and Rangers, Fred Shero.  I will spare everyone the patronizing details of the guys that everyone knows about.  You can click the links on their names if you want to see their stats and accomplishments.  But no one can deny that all three deserve to be in there.

The two I wanted to give a little respect to were Heaney and Shero.  Heaney is not likely known by the casual hockey fan unless, of course, you pay attention to international play and the Olympics.  But again, her accomplishments on the ice are legendary in not only women's hockey but all of the hockey world.  Fred Shero had virtually been locked out by the Hall since his death in 1990.  In fact, modern hockey owes much of its structure and day to day operations to the innovations created by Fred.  He was a hockey thinker ahead of his time for sure. 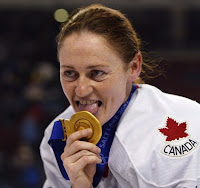 Geraldine Heaney won gold with Team Canada SEVEN straight times at the Women's World Hockey Championship from 1990 on.  She is arguably the best women's offensive defensman and was awarded that honor in 1992 and 1994.  I'm sure everyone has seen her career highlight reel goal in the finals of the 1990 World Championships.  If you haven't, here is a link to check out.  It rivals any highlight reel goal from Gretzky, Lemieux, Jagr, Orr, Howe, you name it.

She also won a silver medal in 1998 at the Nagano Olympics and gold in Salt Lake City.  She finished her career in International play with 27 goals and 66 assists through 125 games for Team Canada.  She still holds the team records for defensemen in championship games played (35), points (36), goals (8), and assists (28).  After that, she went on to coach the University of Waterloo's women's team for six years and now coaches her daughters team.

Fred Shero, or The Fog as he became known, coached the Flyers to back-to-back Stanley Cup Championships in 1974 and 1975.  He also coached the Rangers to the finals in 1979, acting both as GM and coach.  The nickname apparently came from his demeanor with his players and other coaches and his "mysteriousness" as his son, Penguins GM Ray Shero, calls it.  Fred was a quiet guy and had few words for small talk.  He was all business and had one of the greatest coaching minds hockey has ever seen.  Shero is also famous for his inspiring speeches and quips.  Anyone that has ever seen the inspiring quote, "Win today and we walk together forever," can thank Mr. Shero. 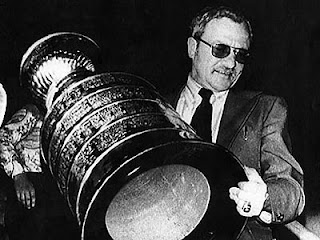 Shero was an innovator.  He is one of the first coaches to implement the daily morning skate routines that almost every team in the NHL use today.  He was also one of the first coaches to implement the use of game film and "scouting" film of other teams and players, which seems commonplace in today's sports but was rarely, if ever used in hockey.  He hired the first full-time assistant coaches to help with both ice and player management as well as take some of the burden off the head coach.  But one of his biggest contributions to hockey, at least in my opinion, is his pioneering of international team scouting.  Shero would look at teams all over Europe, taking from them new ideas such as planned on-ice "plays", system design, and other coaching philosophies not yet seen in the US.

Shero had been snubbed for years by the Hall of Fame.  I can't really say why because you can't argue with his record.  Two Stanley Cups, Three Calders, the all-time coaching wins leader for the Flyers, and a Jack Adams award to go along with it.  Plus his contributions to the game of hockey as we know it are virtually endless.  But for some reason, the Hall has kept him out for so long.  The only thing I can think of is the perception people had of him during his coaching career and the style he implemented during his Championship seasons.  He is, after all, the big reason Philly was known as the Broad Street Bullies.  Regardless, he now takes his place in Toronto where he belongs.

Collectors can rejoice if they populate their PC's with any of these hockey greats as they will most certainly see some type of highlight cards or tribute cards in the near future.  Until then, I wanted to take a brief look at the hobby power of each of this years' inductees.

Her first appearance on cardboard...1994 Classic Women of Hockey #W19

By the way, my favorite quote attributed to Fred Shero???


"When you have bacon and eggs for breakfast, the


This is just for fun so don't be a hater.  The information comes from Beckett's Online Guide but is not an endorsement of any product or service they sell.  Many locally issued/team issued, or "oddball" cards of any of these players may not be listed.  Values are not official but put on as a reference to each players potential impact in the hobby.  I probably shouldn't have to say it but check your local hobby market or other online resources for real time trading/selling values.

This Post Brought To You By dogfacedgremlin at 6:00 PM 2 comments: 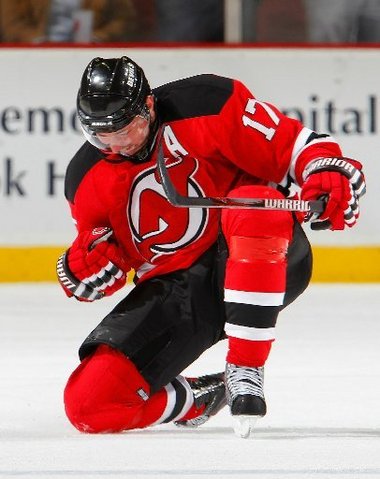 In the world of the bizarre and unexplainable, this happened.   Homesickness or not, what was he thinking?

First the crazy contract issues in 2010, the financial penalties as a result, the lost draft picks as punishment...then Parise leaves for Minnesota...now this?  New Jersey could be in for some long seasons if old Lou can't muster up some of his magic.

They have $6 million to play with now but a hefty recouped salary penalty to pay off over 12 years.  Kovalchuk isn't a guy you can just replace either.  That's like trying to replace a Malkin, Crosby, or Stamkos (or even a Gretzky or Lemieux).  Not impossible, but highly unlikely.

If you were Lou Lamoriello, what would you do??

This Post Brought To You By dogfacedgremlin at 7:00 AM 2 comments:

Email ThisBlogThis!Share to TwitterShare to FacebookShare to Pinterest
Labels: devils are screwed, i hate the devils, ilya kovalchuk, kovalchuk retires 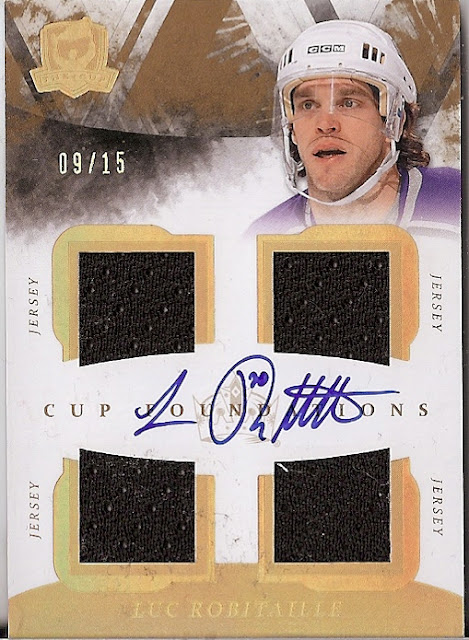 2010-11 The Cup Foundations Quad Jersey/Autograph Luc Robitaille #/15
This Post Brought To You By dogfacedgremlin at 7:00 AM No comments: