I used to post box breaks on the blog quite often but I haven't done a review in quite some time.  Now that the first release of the 2015-16 hockey season has hit the store shelves, I felt the need to start things off on the right foot again. 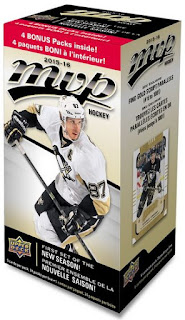 Upper Deck, once again, unleashed their low-end, "for the kids", early season release of MVP.  MVP was a longtime product that disappeared from the market for a few years, only to be revived a number of years ago as an insert to the flagship product.  Last year it made it's return and this year it's back.

The base set this year is comprised of 250.  The first 100 of these are quite easily obtainable.  The rest are all Short Prints of either vets or Rookie, mixed with a return of the NHL Territories cards as a subset rather than inserts.  These are just like the Hometown Heroes sets of old.  The ever popular Silver, Gold and Super Scripts are back as well.  They have also turned the Territories cards into a memorabilia parallel and included an even rarer Autograph version.

New this year is the Colors & Contours parallels which feature a whopping nine tiers to chase.  There are Purple, Teal, and Gold version. I have seen some of these and they are very nice but really Upper Deck?  Nine tiers of these?  Is that necessary for an entry level product?  Most hobby boxes should yield about six of these, the same rate as Young Guns fall in the flagship product.

What I find intriguing is the "hits".  Normally MVP didn't really have anything other than the occasional Jersey card or the multi-player memorabilia cards of old.  The occasional Super Script would pop up now and again but that was about it.  This year, Upper Deck, while not promising anything directly, has include a "hit" per hobby box.  However, the "hits" are considered either a Super Script, Auto, Jersey, 1/1, printing plate, or rookie redemption.  Many collectors have already voiced their disdain as anything other than a jersey, auto, or 1/1 is generally considered not a hit.  But, I repeat...it's an ENTRY LEVEL product.  Not a "hit" driven release.

After hearing they were available, I made the trek to the local Target to pick up a Blaster.  This year, Blaster boxes contain 24 packs with 5 cards per pack.  Let me repeat...BLASTER = 24 packs!  Price tag should be between $19.99-$21.99 in most locales (or if you are lucky like me, things could get mis-priced and you end up with basically two for the price of one).  So to get to the particulars...

Here are some of the "cool" cards. 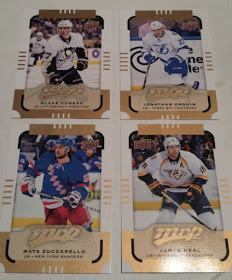 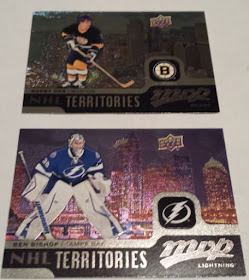 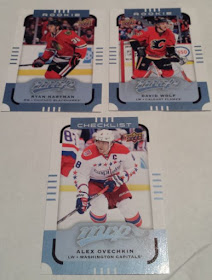 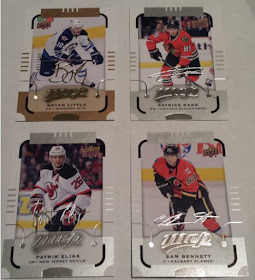