So with the new year rolling around just a few short months ago, it seemed that the hockey card market was going to have one of it's strongest years to date with another Double Rookie class and all sorts of innovative and new products for collector's to get their hands on.  The releases up to this point looked good (with a few exceptions) and the calendar was chocked full of exciting stuff.

Fast forward to today when the NHL and NHLPA announced that each organization has agreed to terms with Upper Deck on a multi-year agreement to be the EXCLUSIVE licensed manufacturer of NHL trading cards, starting with the upcoming 2014-15 season.  Notice how I capitalized exclusive there.  Yes, folks, it's now 2004 once again when Upper Deck held the monopoly on licensed hockey cards.  Panini is out.  They are soooo 2013.  Upper Deck is the future, I tells ya.  But a future that scare the {bleep} out of me as a hockey collector.

I have always been on Team Upper Deck.  I'm not going to lie.  They have always made what I considered, the more superior product when it came to what I collect.  Their flagship set is untouchable by any other brand, period.  The Young Gun rookie subset has been, and probably always will be, a staple of the hockey card industry.  I also enjoy the value of products like Artifacts, the SP releases, and of course, the set collector's wet dream, O-Pee-Chee.

Team Panini was always the "oh, yeah those guys" kind of product to me.  I supported the cause and bought new product.  I collected the Score set every year.  The first year Panini hit the market with products I over indulged on Donruss and Pinnacle, overspent on Contenders, and even dabbled a bit in Dominion.  My favorite single release of Panini was their Crown Royale set.  The die-cut design of old was always a beauty to do a box rip of.  But my favorite overall release was the Rookie Anthology sets.  These cards, while small in the base set, had almost every high-series release of Panini products each year and the boxes were jammed with autos and game-used cards.  They were a great value, especially as the market cooled.  One of my favorite set-within-a-set were the Rookie Treasures with their dual swatches and autos.  Very nice looking design.

But for whatever reason, despite the popularity of the product, the spirited competition between brands was obviously not a concern for the NHL and the Player's Association.  This now leaves us, once again, with only one manufacturer in a card market full of thirsty collectors.  While this paves the way for Upper Deck to reach back into their bag-o-tricks and pull products like MVP, Ice, and maybe even Victory back out into their own products, it bothers me a bit that we could see a resurgence of the "recycled" product.  There were quite a few years throughout the mid-late 00s where the products all began to look alike.  Photography was reused, card designs were duplicated, and it started to feel like some of the products were just being phoned in.

Competition is good for any market.  Whether you have brand loyalty or not, having alternatives pushes creativity and design.  When there is a market of hockey collector's looking for the next big thing, having multiple brand options at various price points makes for a much more enjoyable collecting experience.  Whether it's Panini, Topps, Leaf, In The Game, Press Pass, etc., exclusive licenses have the potential to hurt the overall collecting experience of a sport.  I'm not going to go as far to say that UD vs. Panini was like a Coke vs. Pepsi thing (which makes ITG...RC Cola?).  I think there is plenty of room in this market for more than one brand.

I just hope Upper Deck uses this opportunity to the fullest, doesn't lose their momentum on product releases, designs some innovative products, and forces the doubters (including myself) to change their minds.  With great power comes great responsibility and Upper Deck has a duty from this point forward to bring-it with each and every release.  I know they are going to start with the return of MVP to their own brand in August.  I'm not sure that is going to be their best move but we'll see how this whole thing impact the hobby going forward.

One Of My Favorite Pens D-Men, Out Six Weeks With...A STROKE!!?? 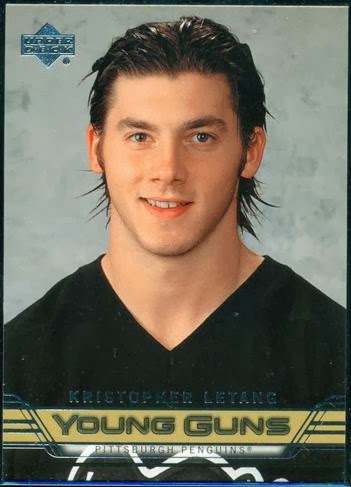 But you heard that right in the title...or maybe you heard on hockey news somewhere already.  Kris Letang, a finalist for last years Norris Trophy, suffered what doctors say was a stroke. They don't think it will threaten his career but one can't help but wonder if it could effect his game going forward.  I guess a better question is, should there be a game going forward?

Letang suffers from a small hole in the wall of his heart, a birth defect that occurs in all babies but usually repairs itself.  Doctor's think it may have led to the stroke.  The Pens GM Ray Shero, said he had only one episode of dizziness last week.  As a result, he sat for a few games while they did further tests.  Not until he returned to Pittsburgh did they find the issue.  Right now, he is on the shelf for at least six weeks before they evaluate him again.

He was quoted in the press conference as saying...

"I hope that by making my condition public at this time I can help other people by encouraging them to seek medical help if they experience some of the symptoms associated with a stroke, regardless of their age or general health. It obviously was a shock to get the news but I'm optimistic that I can overcome this and get back on the ice."

This is probably old news for many of you but it was new to me when I heard about it this morning while watching Olympic coverage. 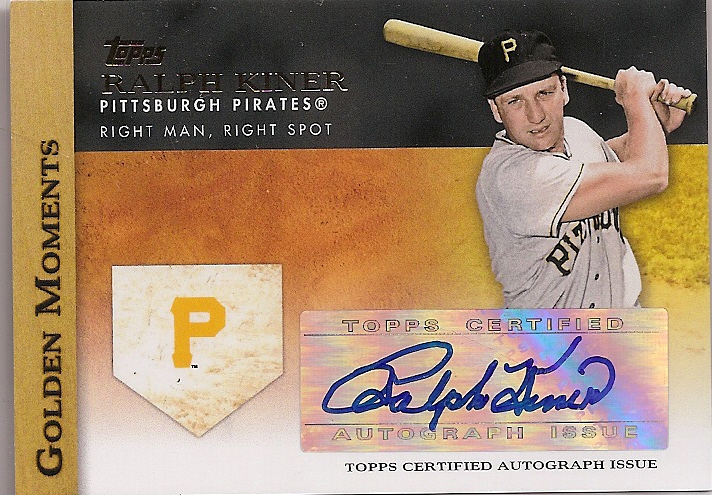 Kiner doesn't get mentioned all too often in the circle of great power hitters.  Sure you hear about the Babe, Ted Williams, Mickey Mantle, and others but Kiner did what none of them could.  From 1946-1952, he hit 100 more home runs than any other player in baseball.  He averaged 44 homers and 115 RBIs in each of those seasons.  In 10 MLB seasons, he led the league in home runs his first seven (six of those leading all of baseball).  If it wasn't for some difficult back problems and a lingering injury, who knows what kind of career Ralph would have had.  His 369 career home runs could have been double that or more. 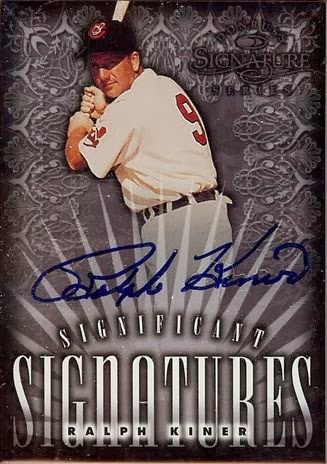 After his playing career, he took a job with the upstart New York Mets organization in their announcing booth and stayed there till the end. 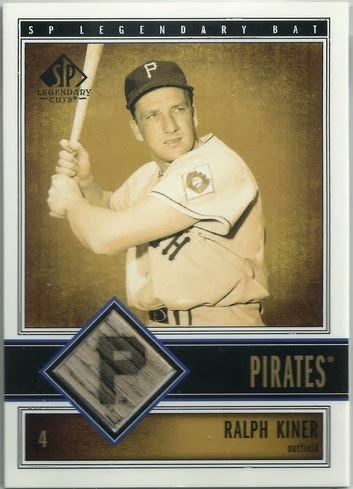 His personality, wit, and charm will be missed by Mets and Pirates fans alike.  But just like with the passing of other legends, his legacy and impact on baseball should be shared with future generations to come.

I thought I would share a few of my favorite Kiner cards in my collection.  RIP, HOFer Ralph Kiner.
This Post Brought To You By dogfacedgremlin at 5:30 PM No comments: Links to this post