A Recap Of the Last Regular Season Game At Mellon

So since I couldn't take part in the festivities last Thursday night in Pittsburgh, I have to live vicariously through my youngest brother who actually witnessed the game in person.  I made sure he took plenty of pictures so that I could share them with the world.  I have such power.  This is image heavy so it may take some time for it all to load.  The first set is pre-pregame.  Pics of the stadium, the players arriving, 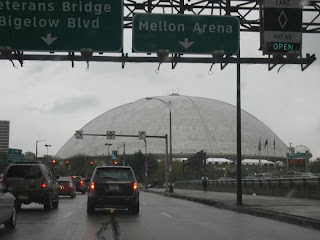 First, in case there was any question as to what that domed structure was in the distance, that traffic sign provides a good label. 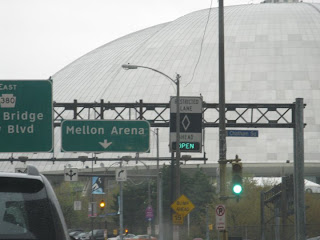 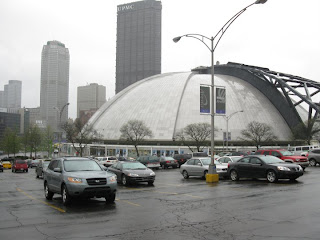 See, if you get there early enough, you can get a great parking spot.  The beam structure on the side (is that the side...technically it's a circle so there is no side) is the retractable roof mechanism.  I don't know how it works, it just does. 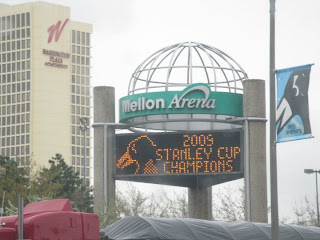 'Nuff said.  Hopefully we can just change the last two numbers and move it to the new marquee across the street. 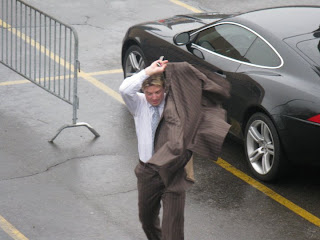 Ruslan Fedotenko walking into the stadium.  My brother and sister in law always find a way to get back to the player entrance and get pictures and autographs from all the guys.  I am so jealous. 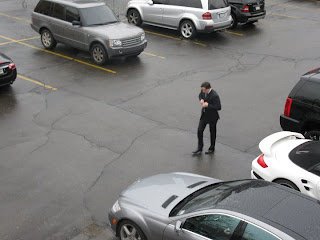 Marc-Andre Fleury trying to button his jacket that appears to be too small. 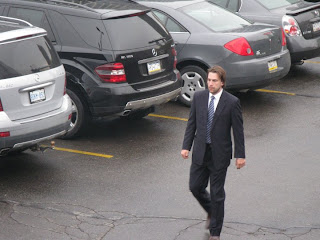 Eric Goddard on his way into Mellon. 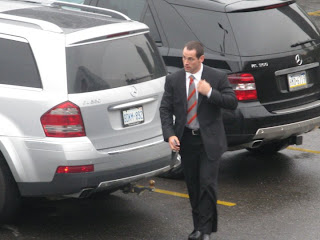 Craig Adams heading toward the locker room.  Interesting choice of tie for the occasion. 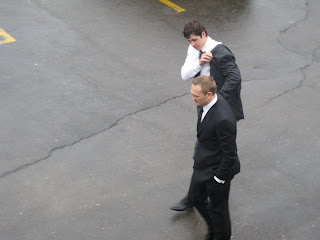 The Russian Mafia...Evgeni Malkin and Sergei Gonchar before the game. 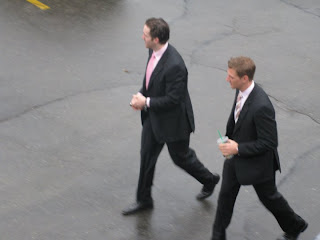 Brooks Orpik and Mark Eaton.  Is that a Slurpee or an Icee in Eaton's hand? 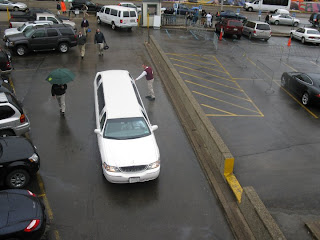 A white limo, the second of two.  Who was in this one?  10-12 Penguin veterans arriving for the opening ceremony before the game. 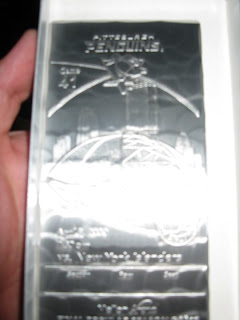 This is a shot of the commemorative ticket that was given out with admission to the game.  I want one.  These were made by the Wendell August Forge, the oldest and biggest in America.  The crazy part is that after they got the order, the place burned down.  They had to rebuild and still were able to fill the order.  They are all handmade pieces.  Even if you aren't a Penguin fan or hockey fan, this is a great example of some fine metal work. Here is a great video that shows how they are made.

--More to come.
This Post Brought To You By dogfacedgremlin at 9:52 PM